Airport Simon Bolivar International Airport, located in (or near) Caracas has 2 runways, of which the longest is 11483 feet (3600 meters) long. There are Caracas Airport departures to Latin America, US and Europe. 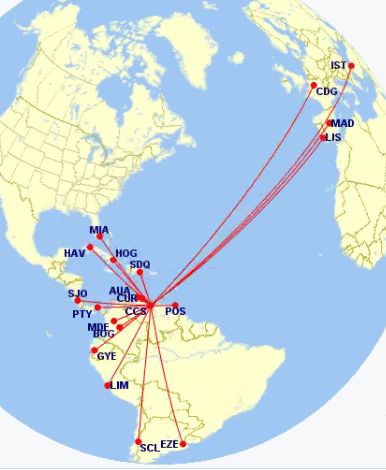 In recent years, the country has been struggling and this is also reflected in the numbers of Simon Bolivar departures. There are fewer flights because the pandemic and there are almost no international flights at all. Some of the flights that exist are performed by cargo flights. There are some passenger flights, such as with Estelar to Panama City (PTY) and with Turkish Airlines to Istanbul (ISL). Hopefully it will pick up again soon for the country. The international flight routes start increasing again in 2022.

It is the west facing airport (Aeropuerto Internacional de Maiquetia “Simón Bolívar) located 14 miles from the center of the capital, Caracas. It is easy to get by taxi (make sure to get the official one), bus or car rental. lay in 30-45 minutes.

There is a terminal for domestic Maiquetía departures and one for international Caracas departures. Vensecar International and Solar Cargo have the most cargo destinations.

For domestic and regional flights you will see most are:

International destinations are the following:

The history of the airport dates back to 1945 when it was opened as Aeropuerto Internacional de Maiquetía. The US subsidized the airport of Caracas. A few years later, new sections were added to the terminal. The runway was also extended to 6,600 ft including lighting to enable night flights. A second runway with a length of 9,800 ft was soon built. In the 1970’s, the French Concorde even flew weekly from Paris to Caracas. A stop was made in the Azores. To meet the demand in the 1970’s, it had to be expanded. A new terminal with more capacity was built. This later became the international terminal when a domestic terminal was built in 1983. Since the year 2000, continuous improvements have been made to the airport and terminal with improvements to the security, customs and immigration area.