Seattle-Tacoma International Airport is located near Seattle in the U.S. state of Washington. The airport is also called Sea–Tac Airport. It is the largest airport in the northwestern United States. The airport is home to Alaska Airlines and is also widely used by Delta Air Lines. The airport consists of three terminals and three runways. In addition to Seattle-Tacoma Airport, the metropolis of Seattle has two more airports, namely King County International Airport (Boeing Field) and Paine Field Airport on the site of the Boeing Everett Factory. Downtown Seattle is accessible by public transportation (Link Light Rail) and taxi.

It is in the top 10 busiest airports in the U.S. Last year there were 450 thousand SEA airport departures transporting almost 52 million passengers. This was done through one of three runways with lengths from 8,500 to 11,900 feet long.

It all started in the year 1947. The first scheduled Seattle Tacoma departures took place in a beautiful design lobby with many windows towards the planes and runways. From that moment on it could already have a capacity of almost 1000 people per hour. Many flights were operated by Western and Northwest Airlines. The first goal of 1 million passengers per year was achieved relatively quickly in 1954. The doubling came 8 years later. This was partly due to the jet planes and international flights from Tokyo Japan. There were also flights with Pan Am on the route to Honolulu.

Over the years, more and more expansions and improvements were made to Sea Tac Airport. This included a connection with the Boeing 747 between Chicago and New York. A few years later, the Supersonic Concorde aircraft also came with SEA departures. The growth made Seattle Tacoma airport the 19th busiest in the US.

With a new runway and the latest technologies, it became possible to land even in bad weather. Ultimately, today the airport is in the top 10 busiest airports in the US.

Directions to downtown Seattle: Join I-5 N in Tukwila from Air Cargo Rd and WA-518 E. Continue on I-5 N to Seattle. Take Exit 164A from I-5 N. Merge onto I-5 N and drive 9.1 miles. Follow the 2nd lane from the right to take exit 164A onto Dearborn St toward James St/Madison St. Keep left to continue toward 7th Ave. Follow the 2nd lane from the right to follow signs for Madison St/Convention Ctr. Keep right, follow signs for Madison St / Convention Center N and merge onto 7th Ave. This is how you drive to city center Seattle.

There are several options for getting to or from the Seattle Tacoma airport. We will name a few: 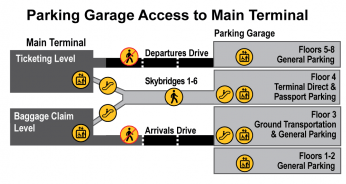 There is 1 main terminal with a North and South Satellite and a total of 80 gates to start from. The Seattle Tacoma departures start in the main terminal on Level 5 where the check-in counters are located. Then you can go to the concourses for the gates. Most Seattle flight departures are with the carrier Alaska Airlines with a market share of 43 percent.  Some others are Delta, American Airlines, SkyWest, and Southern Airlines.  When you arrive if you need to go from Level 5 to Level 3 for baggage claim area. At that level you could travel further by having Seattle airport departures by bus or taxi. If you have to start your flight in one of the Satellite terminals you go via security to Level 2. From there you travel for a short trip to North or South Satellite terminal.

Most international flights go to Vancouver, Canada. In addition to Alaska Airlines, the carriers Delta Air Lines and Air Canada also have Sea-Tac airport departures for this route.

Other top international routes from Seattle Tacoma airport are the following:

The country of Mexico is a very popular area to fly to for a vacation. There are also Mexicans in Seattle who like to visit their friends and family. Therefore, there are many flights to the country. One of the possible escape routes are as follows:

There are no hotels in the terminal or on the airport grounds. You can take a short courtesy bus to your desired hotel. There are many available within 1 or 2 miles. Some options: