Seattle-Tacoma International Airport (IATA abbreviation: SEA) is one of the busiest airports in America. The passenger number is over 51 million passengers a year. The Seattle arrivals kept rising over the years until the pandemic.  The airport is also known as Sea-Tac Airport, and is actually located in Tacoma, a neighboring town directly south of Seattle. It is home to Alaska Airlines and its subsidiaries, Horizon Air which you find in Concourse C of the terminal. The airport is located on a piece of land of almost 4 square miles. This is certainly not one of the largest airports in the US, but it is well appointed. There is 1 large terminal which is then subdivided with Concourse A to D and there is a North and South Satellite building to process flights. Three runways are available.

The Port of Seattle is a government agency that had the airport built in 1944. The reason for this was that Boeing Field, an airport south of Seattle, was used by the military during the WW2. The first scheduled flights finally took place in the year 1947. These Seattle arrivals came from the carriers Northwest and Trans-Canada. In the years that followed, more and more airlines came from Boeing Field to Seattle Tacoma Airport. They started with 4 runways that were extended over time, improved and adapted to eventually 3 runways. Seattle Tacoma arrivals continued to increase with more airlines such as Western and Pan Am as well as Alaska and Pacific Norther. About 10 years after the first scheduled flights, there were already more than 200 arrivals in the week.

The first direct flight from Europe came with Scandinavian Airlines and Pan Am. Concourses were built at the current terminal to allow more aircraft to connect to the terminal. In the meantime, there were already dozens of gates with connections to the aircraft with a footbridge. This mainly happened in the 1960’s. The main terminal itself was also expanded, increasing the surface area by four times. Since the maximum space had been reached, 2 new satellite terminals were built in the early 1970’s. These could be reached from the main terminal with an underground train.

The final third runway as it is today was not opened until 2008. It has the facilities to even have arrivals with low visibility. As Delta Air Lines expanded in 2014 to use Seattle as a transpacific hub, flights increased rapidly.

The distance from Seattle-Tacoma Airport to Downtown Seattle is about 14 miles. It takes 30 to 40 minutes by car. To Downtown Seattle you should drive to the area between Pike Place Market and Pioneer Square. The Seattle Center and Space Needle events complex are located north of the city center. The travel time from Seattle-Tacoma Airport to city center (Convention Center) is 35 to 45 minutes with a distance of 25 miles. 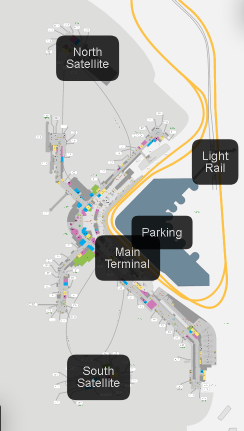 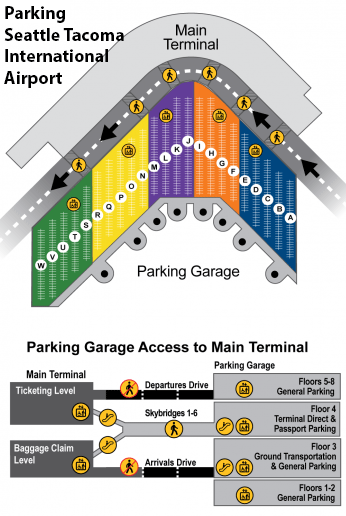 Seattle-Tacoma International Airport has one main building with attached four piers, called concourses. There are two remote terminals which are connected to an underground transport system. The South-Terminal and the North-Terminal have both Seattle Tacoma airport arrivals. 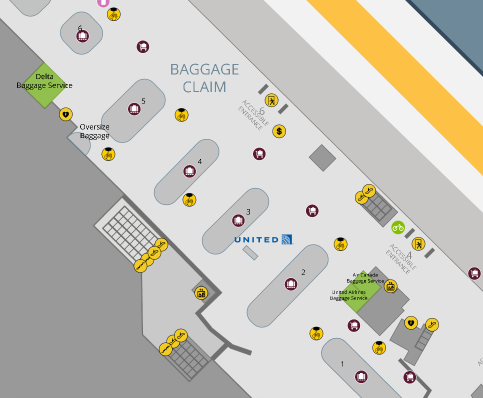 There are a variety of restaurants and shops pre- and after security.

There are 3 runways from 8,500 to 11,900 feet for all the Seattle Tacoma arrivals that yearly process around 450 thousand aircraft.

The airport is a major forward hub to Seoul-Incheon, Taipei and Tokyo Narita and Haneda Airport.

There are also many Seattle Tacoma international airport arrivals from Canada such as Vancouver and Victoria. More destinations like Kelowna, Calgary, and Toronto are offered by different airlines.

Now due to the pandemic most flights are domestic. Many SEA airport arrivals fly in from the following US cities:

This includes the well-known American airlines:

Other frequently seen airlines during normal circumstances with Sea-Tac airport arrivals are the following:

Along the International Blvd/Pacific Hwy S many hotels can be found within a range of 1-2 miles. Most of these offer a free shuttle service. So there is no hotel in the Terminal. Some of these are even within walking distance. Hotels with good reviews: