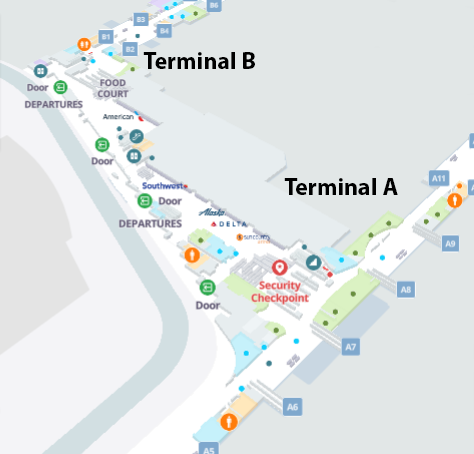 American and United Airlines have SAT flight departures from Terminal B.

There are some top destinations at this airport. The flight departures to Dallas Fort Worth Airport are most frequent and often flown by American Airlines. Other busy routes are:

There are only international flights south to Mexico. There are a couple daily flights a day to the nearby city across the border at Monterrey Airport. You can fly this route twice a day with VivaAerobus. There is a cargo flight of Zorex as well to this place. VivaAerobus also has a route to Silao Del Bajio. Then Volaris will have a daily flight on average to the big city of Guadalajara. However, most flights go to Mexico City. The airlines Aeromexico, VivaAerobus, and Colaris all have a couple flights a day to the capitol of Mexico.

The Commercial Outer Curb in front of Terminals A and B is the hub for all ground transportation.

Drive your own car, park your car and go for SAT departures. There is a Long-Term and Short-Term Parking Garage, as well as the Economy Green and Red Parking Lots. You can park your car for up to 30 days on-site. The cost of parking varies depending on your needs and luxuries. Any picking anyone up from SAT can use the Cell Phone Waiting Lot, which is located one block off of 410, behind Burger King and QMart, on the corner of Airport and Northern Blvd.

Weekday mornings are the busiest times for flying out of SAT, so if your flight leaves before 7:30 a.m., you should arrive at least two hours before departure. Spring Break, mid-July to early August, Thanksgiving, and Christmas to New Year’s are all busy times at SAT.

After you’ve checked in and approved, you’ll get a Known Traveler Number, which will grant you access to a quick screening line. You will spend less than 5 minutes in line for a security check if you use Pre-Check.