Salt Lake City International Airport, is a civil-military airport located about 4 miles west of downtown Salt Lake City in Utah, United States. The Salt Lake City Department of Airports owns and operates the airport, which is owned by the city of Salt Lake. This airport is a major Delta Air Lines hub, accounting for roughly 70% of overall Salt Lake airport arrivals.

Some of the airlines with frequent Salt Lake City flight arrivals:

The numbers of passengers grew last decade from 20 to almost 27 million a year. This increase of Salt Lake City Airport arrivals stopped in 2020 with just 14 million passengers. If we look at the most popular flight route in that year, it is to Denver in Colorado. The top 10 is completed by:

Other busy routes are the following:

Most SLC arrivals from international routes are from Delta and KLM. The flight will then arrive from Amsterdam Schiphol Airport, The Netherlands. Other popular flights are: 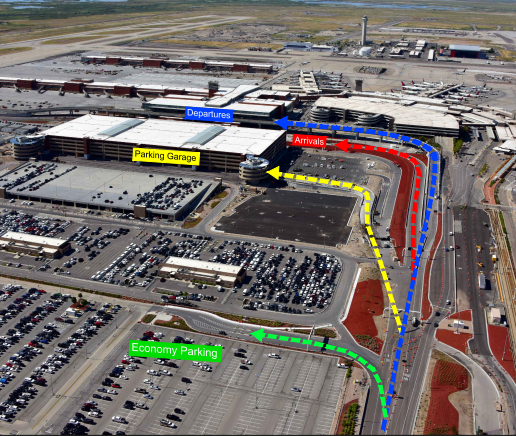 UTA buses can also be boarded outside the UTA Welcome Center at Terminal 1’s south end, as well as outside Terminal 2 near baggage claim 8 near SLC arrivals hall. On weekdays, UTA routes 453 and 454 have limited service. On weekends, there is no bus service to the airport.

Outside of Salt Lake City airport arrivals baggage claim, at door 7 in Terminal 1 and door 11 in Terminal 2, shuttles, limos, and taxis are open. Both Uber and Lyft are permitted to operate at the airport; pick-up areas for both terminals get indicated by signage in the middle traffic lanes outside of baggage claim.

Passengers with disabilities are given special attention at the Utah airport. TDD phones are available in the terminals, as well as ramps and elevators, wheelchair service, convenient ground transportation, and accessible restaurants. For international Salt Lake airport arrivals, the airport also provides translation services in more than 200 languages.

The Delta Sky Club is the only lounge available to passengers at SLC. Once you’ve cleared security, this is situated on level 3 of The Plaza and is open daily from 4:45 a.m. to 1 a.m.

Although there are no hotels on the airport grounds in SLC, the nearest one is only 1.5 miles away which you can use after late night Salt Lake City flight arrivals. Most of the hotels nearest to the airport are 2 or 3-star, so you’ll have to travel into the city if you want a little more luxury.