Sacramento International airport offers excellent facilities for all business and casual passengers. It is located 10 miles from the center of the city. The location is on 6,000 acres of land in the state of California. It is an important gateway for tourists to visit Yosemite National Park and Lake Tahoe, for example. Most flights are operated by the carrier Southwest Airlines with a market share of 50%. Most routes go to other US destinations on the west coast. Sacramento Airport has 2 terminals and 2 almost identical runways. Every year, 10-13 million passengers pass through the airport to travel. In 2019 airport serves a total of 13 million passengers. In 2020, there were 91.625 Sacramento departures  (aircraft operations) with total annual passengers of 5.5 million.

Sacramento airport opened in 1967 as Sacramento metropolitan airport with an 8,600 runway that still exists today. The first real improvements were made to the airport in the 1980’s. There was an Inspection Field Office, in-flight catering facility, an extra runway, and another cargo facility. The second runway had a nice opening with the French plane Concorde. In the year 1998 a rental car facility was established. The same year saw the opening of the current Terminal A. With that opening, the airport also received the name International in its title. However, it took a few more years before the first Sacramento Airport departures were a fact. There was a direct flight to the Mexican city Guadalajara.

Due to the popularity, more and more airlines started offering air routes, both domestic and international. As a result, the airport had to continue to expand and renew. A new parking garage was opened in 2004. In fact, in 2006, free wireless internet service was one of the first in the country. After global economic problems, the airport’s growth stagnated for several years. Nevertheless, a new terminal was being built. Terminal B opened in 2011 for the first Sacramento departures. After that, the growth in passengers and flights continued from 9 million to eventually 13 million passengers in 2019. 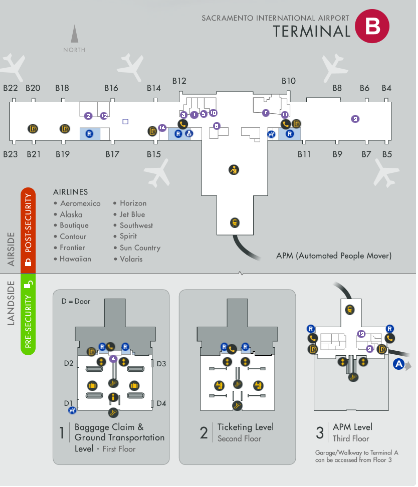 A Hyatt Place hotel is planned between these 2 terminals. All two-terminal provide excellent customer services. There are all the facilities including restaurants, shops are available in this airport.

Sacramento International airport serves millions of passengers in a year. In 2019 a total of 13 million passengers but SMF flight departures decreased after. In 2020 the graph is going down because of covid-19 people are less comfortable with traveling. So in 2020, only 5.5 million passengers are using Sacramento international airport. To serve those 5.5 million there were 91,625 Sacramento flight departures needed, mostly to the following cities.

You can easily get to Sacramento international airport by:

Before Sacramento Airport departures there are some options to park your car in front of the terminal. All parking option in this airport are affordable and come under first come first serve. Here you get several parking packages like: