Phoenix Sky Harbor’s name was devised by J parker van Zandt, the owner of Sky Airways. Acme investment company owned the airport after the collapse of sky airways in 1929 and the airport started with PHX airport departures that year. The airport master plan redesign was in 1959 to eliminate the cross runway and make a new terminal to improve the Phoenix Sky Harbor departures.

There are currently 2 terminals active at the airport for Phoenix airport flight departures, Terminals 3 and 4. There are no fewer than 103 gates to depart. Terminal 3 is the smaller of the two and is largely used by Air Canada, Alaska Airlines, Delta Air Lines, Spirit, Frontier Airlines, Hawaiian, United, JetBlue and Sun Country. Terminal 3 has been referred to as the John S. McCain III Terminal.

Terminal 3 Level 1 Ticketing to start your Phoenix flight departures in the terminal: 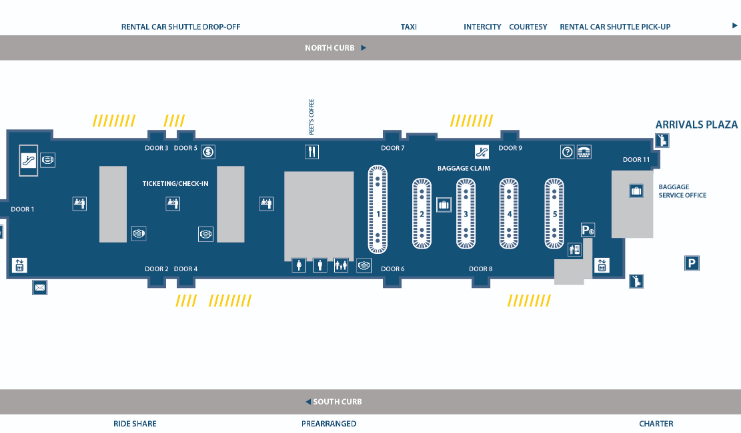 Terminal 4, also known as Barry M. Goldwater, is a large terminal with 84 gates and is important to the airport’s major airlines: American Airlines and Southwest have Sky Harbor airport departures over here. The international airlines British Airways, WestJet and Volaris are also located here. 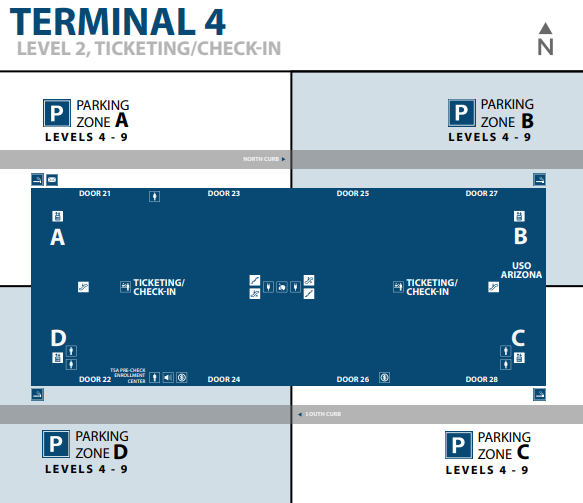 The following destinations are the most popular and have many PHX departures from Phoenix:

Besides the many domestic Phoenix departures it is also an airport with international flights to the UK, Canada, Mexico, etc. There are seasonal flights with Air Canada to Calgary, Vancouver and Montréal – Trudeau and a fixed flight to Toronto – Pearson. WestJet flies to Calgary and to Edmonton, Kelowna, Regina, Saskatoon, Toronto – Pearson, Vancouver, Winnipeg with seasonal flights. British Airways, together with American Airlines, has the most Phoenix Airport departures to London Heathrow in the UK. Volaris often flies to the Mexican cities of Culiacán, Guadalajara and Puerto Vallarta. Other cities in Mexico are flown by American Airlines. Then we are talking about Cancún, Mexico City and San José del Cado as the most popular holiday destination.

Phoenix international airport had 46 million passengers in 2019. But covid-19 pandemic and flight restrictions in 2020 it only served around 22 million passengers that year. The numbers of Phoenix flight departures increase in 2021 again.

There is a Skytrain to transport passengers from the east economy parking lot to Terminals 3 and 4. There is also a connection to Washington light rail station.

You can use valley metro bus route 13 has a stop near the airport operation building. There are also Phoenix airport departures by a number of taxi services and shared-rides provide services to each terminal.

How to get to the airport

Phoenix international airport is connected to the valley metro rail link. You can take the Sky train from terminal 3 and 4 and has every 12–20 minutes Phoenix Sky Harbor departures on any day. Valley metro rail would cost you around 2 USD.

You can also take a taxi and you get in 10 minutes from the airport to phoenix city downtown. You can use Uber and Lyft services as well which are a bit cheaper but maybe less convenient. The super shuttle offers shared van services and it cost 14 USD per person to downtown phoenix.

The airport offers paid parking services. There are many options for parking before you have Sky Harbor departures. 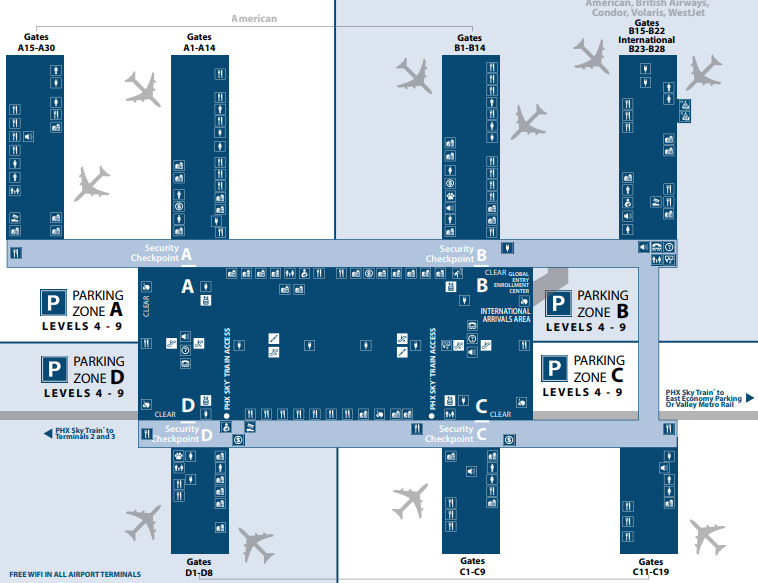