One of the states in North America that have gained fame has been Florida due to its tourism. You may want to join the wave of people who want to walk the state’s streets surrounded by a different environment. To be able to sight see properly, you can travel to the Orlando Sanford airport in the area.

This is one of the most used airports in the region due to its proximity to the attractions that Orlando-FL can give you. You can look at the airtime, facilities, and news it can give you on its available Sanford airport departures.

The Sanford Airport Authority owns the airport and the ADC and GAS, who are its main shareholders. In 2008, the airport marked a milestone by having the largest number of domestic SFB airport departures. 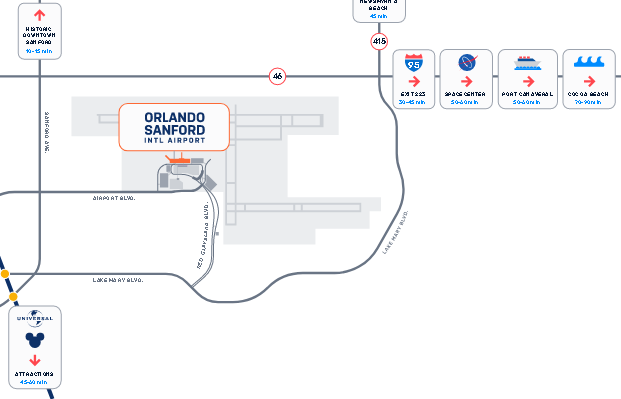 If you land at Orlando Sanford airport, you can take some quality ground transportation for SFB departures:

Right next to the terminal you have parking lot H. This is customary to park for a maximum of one day. The first half hour is free but after that you pay $6 per hour. The parking location G (garage) is diagonally in front of the terminal next to the site of the car rental companies. Here you can park under cover. Parking areas E and L are within walking distance of the terminal. These are recommended for long term parking.

The airport is equipped with several runways for Sanford departures that are distinguished by their specifications:

The airport terminal was rebuilt in 1990 to accommodate more than 1,000,000 passengers each year. Although the terminal consists of a single building, it is well managed between its commercial and international SFB airport departures. Last record was in 2019 when 3,291,112 people made use of the airport. In 2020 there were 1,545,041 passengers.

Terminal level 2 departures map for boarding (ticketing or check-in is at level 1 in Terminal B area):

On these airlines, there are direct and stopover flights to take the destination you want. They are airlines that have been in operation for years from the Orlando Sanford airport.

As part of the destinations that you will have for SFB departures available from the air terminal are:

If the destination you want to occupy from the airport does not appear in the list, you can take Orlando Sanford departures by stopover. In addition, this airport has a phenomenal public service for you to contact from its website if you have any questions.