Minneapolis−Saint Paul International Airport happens to be 17th busiest in terms of passengers, and 12th, when it comes to aircraft operations. Delta and Sun County use it as their base and therefor have most Minneapolis arrivals. The Metropolitan Airports Commission manages the airport. It is surrounded by Richfield, Mendota Heights, Bloomington, Eagan, and twin cities Minneapolis and St. Paul. There are 4 runways to process Minneapolis arrivals and 131 gates divided by two terminals.

It all started over 100 years ago as Speedway Field when a group of locals took over the old race track. A runway and small hangar were made for the airmail services. It will take until the late 1920s for the first passenger flights. It went by several names such as Wold–Chamberlain Field and Minneapolis–St. Paul Metropolitan Airport but in 1948 the airport name as it is now: Minneapolis–Saint Paul International Airport.

The first real big change came from 1958. Lyle George Landstrom designed a new large terminal measuring 600 thousand sq ft. It was put into use four years later. There were 2 concourses that ran from the main building to the runway with 24 boarding gates. About ten years later, 2 more competitions with gates were added. Over the years, several extensions with additional gates have been built, including a moving walkway.

Also referred to as MSP, the airport has two terminal buildings (Terminal 1, 2), four runways, and one airfield for all MSP Airport arrivals. Passengers can use the light rail transit service to travel between the two terminals. 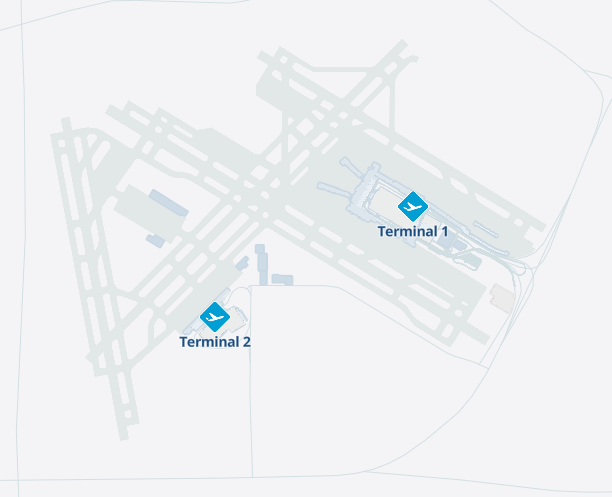 The terminals are in use by local and international airlines. Each airline has it’s own spot at on of the specific terminals for Minnesota airport arrivals. The following airlines are settled at:

The top three international destinations before the pandemic were:

The airport handles around 250,000 landings and takeoffs each year. However, the pandemic has dropped the numbers of Minneapolis Saint Paul arrivals drastically. During December last year, the airport handled just 220,000 passengers.

Safety policies vary from one airline to the other. The airport follows enhanced cleaning procedures to protect passengers.

Some countries and states require passengers to carry a COVID-19 negative test report. JetBlue, United, and American Airlines also offer at-home COVID tests (rapid results) for travelers who need to take results for the test with them during the flight.

The airport has a COVID-19 testing facility at Terminal 1, operational between 7 am to 7 pm. It is offered in association with the Minnesota Department of Health and is open to all travelers. It can be used after MSP arrivals.

Several airlines have installed touch-less check-in points at service desks. There are measures in place for reducing interaction between passengers and crew members. Planes are cleaned using enhanced chemicals and techniques. Besides wearing masks, some airlines also ask passengers to fill out health questionnaires.

Airlines are strict as far as adherence to regulations is concerned. Passengers who do not follow mask mandates and safety policies are put on a no-fly list to ensure Minneapolis arrivals goes smoothly.

Most of the airport shuttles remain suspended. Light Rail and Metro Transit bus schedules for nearby cities are updated daily. If you wish to reach the airport in your own car, please note that at MSP flight arrivals only selected parking ramps at Terminal 1 and 2 are operational. You can also pre-book a parking slot using the airport website.

They advice passengers to use electronic boarding passes and digital passports wherever possible.

Travelers should double-check the terminal for their flight before heading to the airport. You can also check Minneapolis Airport arrivals list online.

There are multiple dining and shopping options at Terminal 2. Some restaurants are operational at both terminals, but diners require to follow physical distancing norms.