Las Vegas Harry Reid International Airport processes more than 50 million passengers per year. It is one of the busiest airports in America. In 2019 it took the 9 place on the list of busiest airports in the US with 51,537,638 Las Vegas Airport arrivals. At the beginning of 2021, the airport was still called McCarran International Airport, but has changed its name to Harry Reid. The airport is only a few miles from Las Vegas Downtown. The owner of the airport is Clark County Commission. Construction of the airfield started in 1942 and was completed in 1948. The first Las Vegas arrivals took place that same year. There are also two passenger terminals and even four runways.

There are many options to get to the airport. 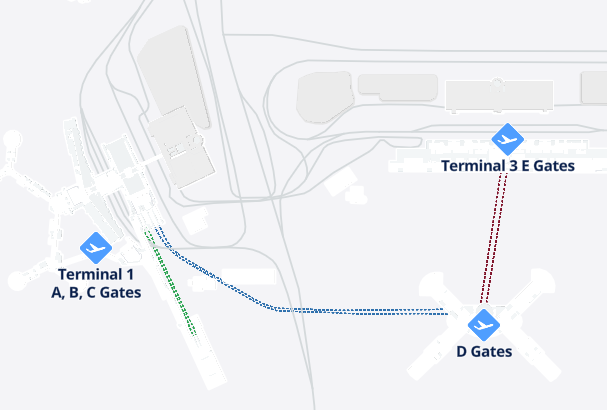 All Harry Reid flight arrivals arrive at one of the 5 Concourses A, B, C, D and E. At terminal 1 are gates A, B and C. At terminal 3 are gates E. Gates D are in another building which can be reached with the Harry Reid Tram. Terminal 1 has baggage claim and check-in for five US airlines: Allegiant, Spirit, Delta Air Lines, American, Southwest. Terminal 3 is for all other airlines such as AeroMexico, VivaAerobus, Volaris, WestJet but also Alaska Airlines, Frontier, Hawaiian, JetBlue, SunCountry and United Airlines.

The most frequently flown route is to Los Angeles, California by the carriers American airlines, Delta, Frontier, United, Allegiant, Southwest and Spirit. Second most Las Vegas flight arrivals are flying from Dallas / Fort Worth, Texas and Denver, Colorado. The top busiest domestic routes will be completed by: