John F. Kennedy International Airport is located in Queens (long island), New York. The location in the southeast of downtown Manhattan. There are 2 other airports around Manhattan called LaGuardia and Newark. JFK carries the most passengers of the three annually and is more focused on international traffic. There are also 4 runways and 6 terminals. Most New York John F. Kennedy departures are of the airlines Delta Air Lines, American Airlines and JetBlue. The route from the airport to Manhattan is can be done in different ways.

There was another name of the airport since its construction. The airport Idlewild was used to make it an international airport. The reason for this was that the LaGuardia airport became far too busy. After its construction in 1948, it was officially named New York International airport. Despite this, it was still called Idlewild Airport at the time. Many flights were moved to this airport. It quickly became busier, with the result that the terminal and facilities quickly became too small. It was quickly added, enlarged and modernized. In addition to the international flights, there were also many domestic flights. It quickly became one of the largest and busiest airports in the US in the 1960s. Several terminals were also added, with some major airlines having their own terminal. The terminals that were built at that time have often already been demolished and rebuilt to the terminals that are there now. Despite the slump in passengers due to the pandemic, the airport has big plans for new and more gates to meet demand. The latest project should be ready in the year 2025. JFK departures should continue to grow by 100 million passengers by 2050.

Directions to Times Square, Manhattan: Enter I-678 N from 130th Pl. Continue on I-678 N. Take I-495 W to the Tunnel Exit St in Manhattan. Take the exit for Uptown/3 Ave/38 St/41 St from I-495 W. Take E 39th St to E 43rd St. This is one option. There are many other options but due to heavy traffic other routes may be faster or shorter. We therefore recommend traveling by public transport.

There are a total of six (probably 5) terminals where New York John F. Kennedy airport departures take place to domestic and international destinations. The numbers of the terminals may be a bit crazy, but that is because some of them are closed.

Below are the terminals with check-in maps. Some airlines are not on the map even if they do have a check-in. 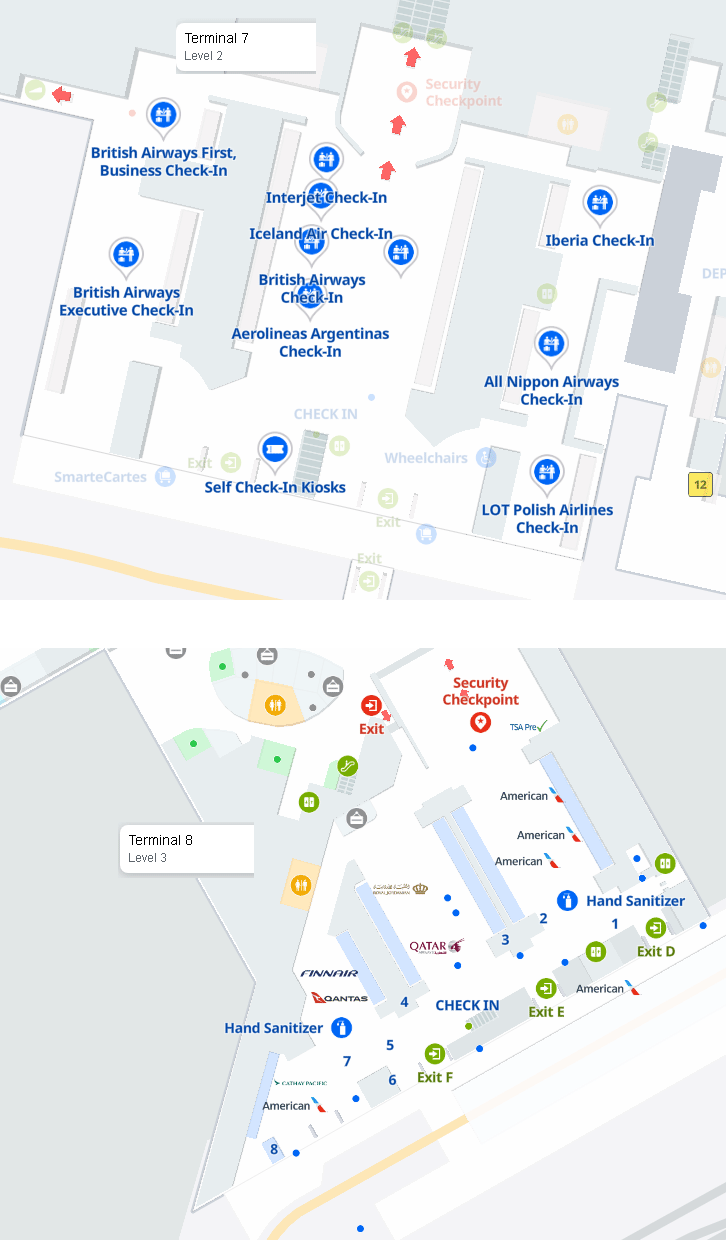 Delta Air Lines, together with JetBlue, has the most JFK departures with a share of 71 percent. The main routes are international to London-Heathrow (British Airways and Virgin Atlantic) and Paris-Charles de Gaulle (Air France). At some distance, you could fly to:

The vast majority of domestic departures go to the following places:

There are no hotels on the airport grounds. There are plenty of options within a short distance if you want to stay overnight near the airport for whatever reason. We have selected a number of hotels with good reviews and free airport shuttle: