Washington Dulles International Airport is located west of the city of Washington D.C. in the state of Virginia. Alongside Ronald Reagan and Baltimore, it is one of three airports serving the region. It is primarily a major gateway for international flights and a hub to other airports in the US. It is located west of the city and is easily accessible via several access roads by taxi, car, or public transport. The airline United Airlines has a base at Washington Dulles airport and therefore carries out most departures. This is even more than 70 percent of all flights. There is 1 terminal building that is connected to Concourse A and B. There is also a second part (C and D) to carry out all Dulles departures. This is all done via the 4 runways to carry 22-26 million passengers per year.

Most flight routes are to other airports that are also on the east coast of the US. Many go to major cities but also smaller airports are accessible such as Jacksonville, Tampa, Southwest Florida, Grand Rapids, and Akron Canton.

There are however so many more possibilities in the Caribbean, Europe, and  Latin America as well.

Washington had opened an airport in 1941 called the Ronald Reagan National Airport. Due to the large increasing demand, there need to come more capacity. A site was selected in 1958 west of the city of 10,000 acres. The Ammann and Whitney organization was commissioned to make the terminal building. The opening was 4 years later which then had 2 floors. It was made with the ability to easily extend the building. Three runways were built with lengths of 6,700, 10,000, and 11,500 feet. All have the standard instrument landing system. The airport then had a capacity for 6 million passengers per year. It was one of the most modern airports in the world. There was an increasing demand for fires, which meant that additional buildings had to be built.

Fifteen years after the opening, the first expansion has been completed with a larger parking area for the aircraft. A few years later, after Concourses A and B, Buildings C and D were added. There were also several cargo buildings, more car parking and a hotel in the 1980’s. After that, the airport bought more land for future use. At the end of the 1990’s, the 20 million passengers per year were reached. Since then, the airport has slowly grown with parking garage 1 and 2, new traffic control tower, Aerotrain system, and an international building was completed.

Easy to find at which ticket counter you should be for Dulles Airport departures . 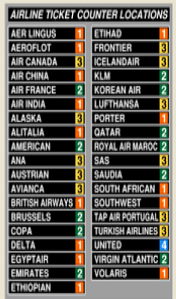 Dulles International Airport has 1 large terminal with attached two Satellite Terminals (A + B and C + D). At the main terminal you have different levels including a Dulles airport departures level. At the arrival level there is baggage reclaim, parking and public transport, and on a floor higher at the IAD Airport departures level are the gates for boarding or arriving. Moving to and from the Concourses is done via the AeroTrain. 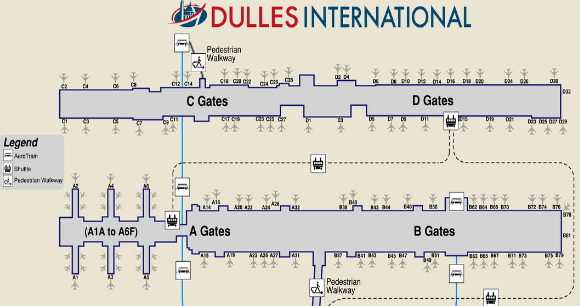 By car you it takes 45 minutes to downtown area Washington DC. It’s about 28 miles. 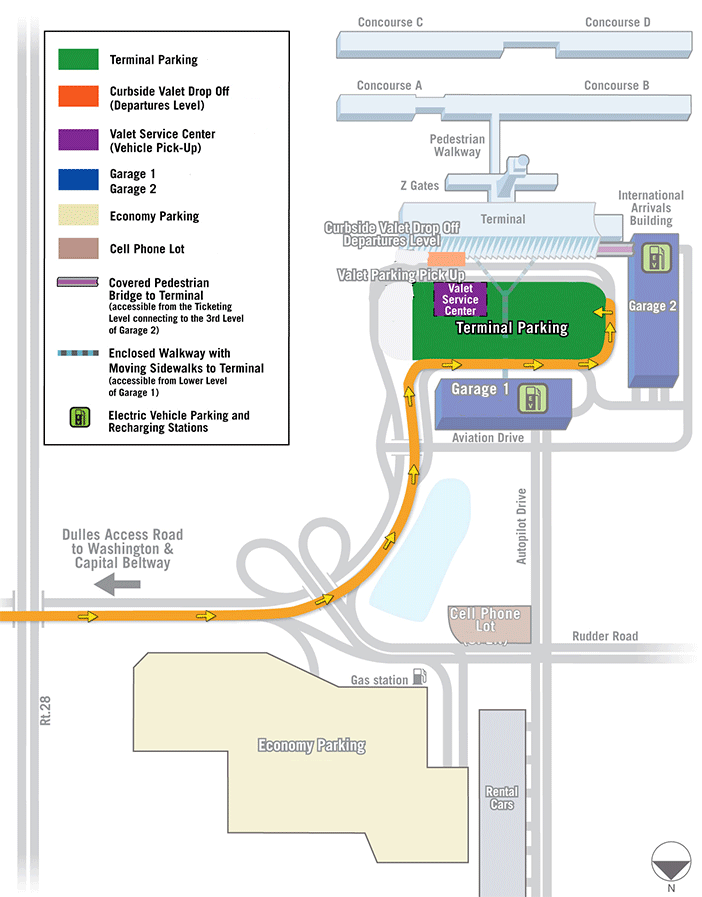 The largest or actually most seen airlines are United Airlines, Mesa Airlines, Air Wisconsin, Delta Airlines and American Airlines. United has nearly 50 percent of all Dulles flight departures. During the 2020 and 2021 corona, the busiest routes will be mainly domestic.

Other airlines that are less likely to land or leave at the airport are the following:

Most Washington departures are going to Denver with the carriers Southwest and of course United. Other major destinations are:

The international Washington Dulles Airport departures for the corona mainly went to London-Heathrow Airport. This route was flown frequently by British Airways, Virgin Atlantic and United Airlines. Other international options are the following:

Do you want a little more rest and relaxation during a stopover or do you have a very early flight and do you want to stay close to the terminal? Then go for the Washington Dulles Airport Marriott hotel. Ideal location just in front of the terminal and parking garages. Other options a few miles away as well as free shuttle service are as follows: