The airport is the main port of the city of Atlanta, located in Georgia state. Located relatively close to downtown, south of downtown, the airport is located on a 4,700 acres piece of land. Atlanta airport is the busiest airport in the world for the last decade. Last year there were 904.301 ATL Hartsfield-Jackson departures. In all these flights a total of 110,531,300 people were transported. It is the main hub for the carrier Delta Air Lines with a fixed base at Hartsfield Jackson Airport. To transport the more than 100 million passengers per year, 5 runways are used. There are also 2 terminals that are divided into domestic and international flights.

The start of Hartsfield–Jackson goes back to 1925. A large piece of land was leased for a period of 5 years. The mayor would develop an airfield on that piece of land. It started as Candler Field because of the previous owner. A year later the first Atlanta departures were a fact. A Florida Airways mail plane flew to Jacksonville. The airlines Pitcairn Aviation and Delta Air followed a few years later. The airport ran well from the start and was one of the busiest airports in the US in the 1930’s. Only Chicago and New York were busier. The first control tower was then also opened.

When the Second World War started it became a military airfield and was used by the Army Air Forces. The airport was later changed to Atlanta Municipal Airport. Due to the growth in flights, a new terminal was built and opened in 1961. There was a central building leading out to various concourses to which aircraft could connect. Between 2-3 million passengers per year are travelling through the airport and the terminal had a capacity of 6 million. There were meanwhile 3 runways. The airport was named after a former mayor in 1971; William B Hartsfield Atlanta Airport. Flights continued to increase and there were the first trans-Atlantic departures via Washington. The first international Atlanta departures went to Jamaica and Mexico City in the early 1970’s. Those to Europe only a few years later and to Asia even in 1992.

Not much later after the construction of the new terminal, it quickly became clear that a new plan had to be drawn up. It had to be expanded. Midfield terminal with 2.5 million sq ft. came with the opening in 1980. The capacity was even increased to 55 million passengers per year. A few years later, even the fourth runway was added, with the fifth and last runway in 2001. In 2003, another name change was made. To honor Maynard Jackson it became ‘Hartsfield–Jackson Atlanta International Airport’. The year 2015 turned out to be a special year. It broke 100 million passengers a year for the first time in world history.

Traveling to and from the airport can be done in different ways.

Atlanta airport has 7 parallel terminals, lettered T, and A to E. Many of the Atlanta airport flight departures going to destinations within the United States. Most of these domestic flights are leaving from Terminal E and F. In the middle of each elongated terminal are the stations of the underground shuttle train which connect the terminals with each other. At Terminal T, the main Atlanta Airport, is the Ground Transportation Center.

There are 2 terminals with several concourses. Terminal 1 is for domestic flights and terminal 2 for international flights. Atlanta Airport is home to Delta Air Lines which is mainly situated in Domestic Terminal South. Other airlines such as United, American, Spirit and Southwest Airlines are located at the Domestic North Terminal for Atlanta flight departures. 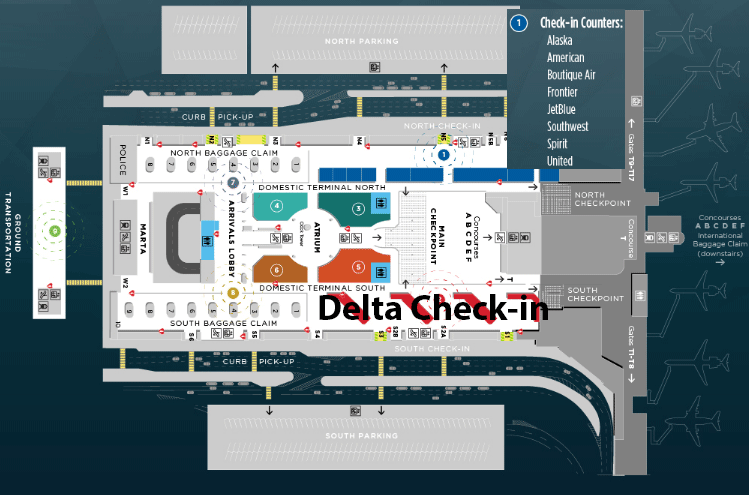 If you have international Atlanta Georgia airport departures, you will therefore have to travel to the smaller international terminal. Sometimes it is easier to go to Domestic terminal first and then take a free shuttle to International terminal. As you enter the terminal, the Hartsfield-Jackson Airport departures check-in counters are on level 2. The first group (red) is for Delta Sky Priority. The second group of check-in counters is:

The last group of counters is for Air Canada, British Airways, Lufthansa, Qatar, Turkish Airlines and Westjet. After checking in, go through security to Concourse E or F. 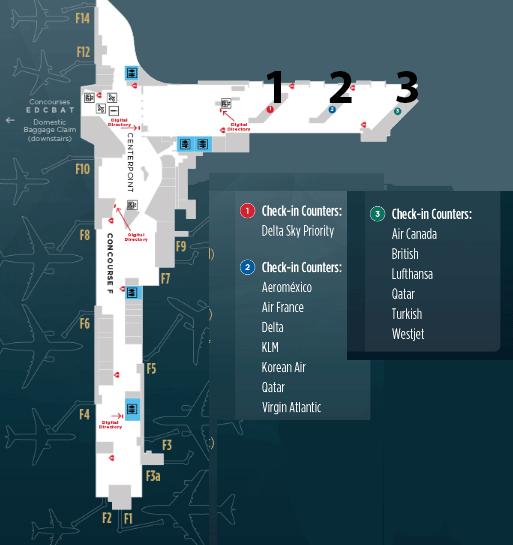 International Terminal is located east and has its own entrance and car parks. 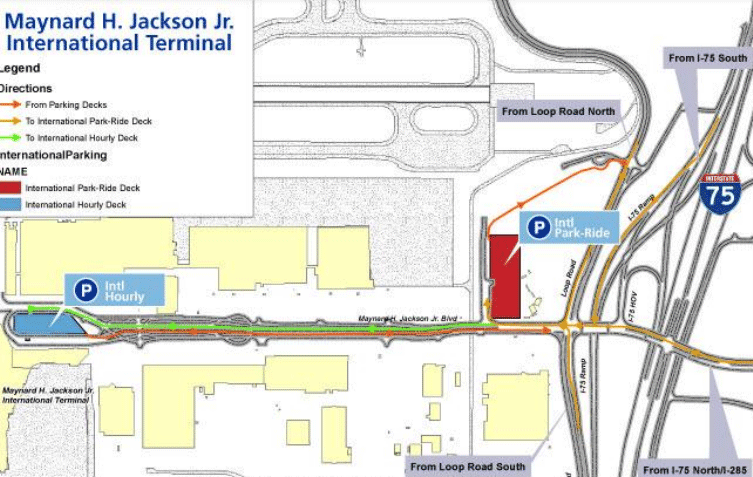 Most Atlanta Airport departures go to Orlando, Florida, with Delta, Frontier, JetBlue, Southwest, and Spirit. The top busiest routes is completed with the following destinations:

Internationally, most ATL Airport departures to Paris-Charles de Gaulle are with Air France. Schiphol Amsterdam comes in second, flown with KLM. The following places will be:

Due to corona, there were not the 110 million passengers in 2020 as in 2019. With a significant decrease, there were ultimately 42,918,685 passengers and 548,016 flight movements. 2021 is off to a rough start but Atlanta Hartsfield airport departures are unlikely to rise again in the second part of the year.