The airport is one of the busiest airports in the world. It is of great economic importance to the state of Georgia, US. and it brings a lot of money and jobs for the region. The airport is not only in use as a start or end destination, but by having Delta Air Lines as a hub, it is also a major transit port. In total, more than 200 different flight routes are operated to destinations around the world. The airport has won many awards and offers passengers a fantastic service.

It is located on 4,700 acres of land with different terminals and 5 runways. There are several parking facilities and multiple ground transportation options to travel to or from the airport. Delta Airlines is the main airline for the airport. In addition, many other national and international airlines fly to Hartsfield–Jackson Atlanta International Airport. More than 100 million passengers use the airport every year.

It all started in 1925. The mayor of Atlanta signed a lease on a piece of land to build an airport on. Eighteen months later, the first flight was a fact. Atlanta airport arrivals came from Tampa and Jacksonville with Florida Airways. There were only regularly scheduled flights a few years later. The piece of land on which the airport is built is bought and the name is changed to Atlanta Municipal Airport.

One of the carriers that is today the main carrier at the airport started operating flights as early as 1930. Delta Airlines operated most of its routes with Eastern Air in the 1930’s. More than ten years after opening, the first control tower was built. The war that started in 1940 turned the airport into military and it was immediately used by the air forces. Due to a rapid increase in passenger flights after the war, it quickly became clear that a new terminal was needed. A hangar was temporarily used to realize the construction of the terminal. Meanwhile, in 1957 more than 2 million passengers passed through the airport.

The era of the jumbo jet aircraft started in the 1960’s. The terminal could not cope with the demand at all. The relatively new terminal had a capacity of 6 million passengers, while in 1961 almost 10 million were already using it. The planning committee is carrying out studies to realize a new terminal. Meanwhile, the airport’s name is being changed to William B. Hartsfield Atlanta International Airport. The term “international” first came into the name because of Eastern Airlines flights to destinations in Mexico and Montego Bay. A few years later, construction began on the largest terminal in the world, which opened in 1980.

This new terminal was not enough, a fourth runway was also added. In the year 1994 a special area (Concourse E) was opened for international traffic with the latest technologies. By all its expansions, it became the busiest airport in the world in 1998 with over 73 million passengers.

With an even 5 percent growth in Atlanta arrivals a year later, a new and for the time being the last fifth runway was added. The airport was named in 2003 after a former mayor named Jackson. It has since been called Hartsfield-Jackson Atlanta International Airport and was extensively renovated and innovated in the following years. It has won several awards including best largest airport. A Skytrain and a center for car rental companies opened in 2009. For years it remains the busiest airport in the world. More and more airlines are also coming to use the airport and so more and more flight routes are increasing. In 2015, the airport finally reached 100 million passengers. 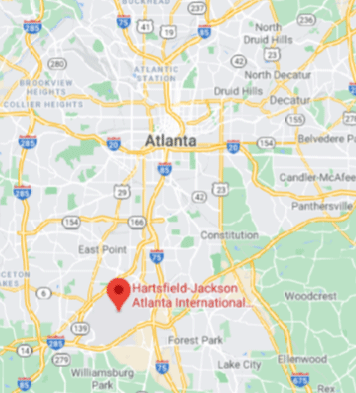 The airport is located south of the city of Atlanta and is easily accessible by car via Interstate 85 if you need to go to the west side (Domestic terminal) and via Interstate 75 to the east side where the international terminal is located. It is located about 11 miles from downtown Atlanta and will be 20 minutes by car when there are no crowds.

There are several ways to arrive at the airport from the city center. There are Atlanta Airport arrivals with shared-ride shuttles (18-30 USD) or hotel shuttles that can be free to guests. The local shuttle services have departures to the city center as well as Alabama, Carolina and Tennessee. There are Hartsfield-Jackson Airport arrivals every 15 minutes from the local service shuttle. You can also use Greyhound Flightlink to get to further destinations.

If you are traveling by car and want to park at the airport, there are many options. Check the website: ATL Airport, for the status of whether the car park is open. Make sure you also drive to the right side of the airport for ATL airport arrivals. There are many parking options at Domestic Terminal North and South via I-85. See on the image below. Rates per day: 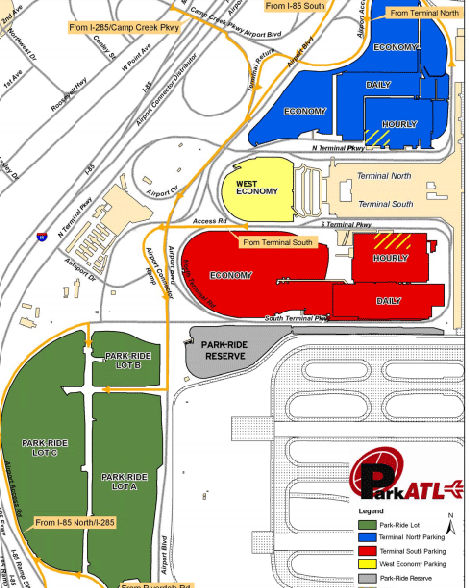 So there are 2 terminals at the major Atlanta airport. Terminal 1 is the terminal for all domestic flights with 6 concourses (T, A, B, C, D). The second terminal is in use for all international Hartsfield-Jackson arrivals and is also known as Maynard H. Jackson Jr. Called International Terminal. Concourse E and F is attached to this terminal. The concourses are connected by a walking tunnel and a plain train on level 0. There are also free shuttle buses between the two terminals.

The domestic terminal is divided into North and South. This terminal handles all Atlanta Hartsfield airport arrivals from the US. Not only for baggage claim (ground level American Airlines) but also for ticketing and check-in (level 2 + all other baggage claim) for domestic departure. The South terminal is only used by Delta Air Lines while the other airlines (mainly American Airlines, Frontier Airlines, JetBlue, Southwest Airlines, Spirit Airlines and United Airlines) use the North terminal. At the international terminal, first level is for the Atlanta arrivals due to baggage claim. Second level is for check-in and security to concourses E and F.

There are 5 medium-long runways for all Atlanta airport flight arrivals. They are 9000-12,400 feet long. Atlanta Hartsfield-Jackson Airport has been the largest airport in the world in terms of passenger numbers. More than 110 million passengers in 2019 using Atlanta airport. That dropped to a 43 million in 2020 because of corona. It will also be a tough time in 2021, but hopefully on the way back again.

It is home to Delta Air Lines, partner of SkyTeam. The busiest domestic routes are to

Most of these Atlanta Georgia airport arrivals are with the airlines Delta, Frontier, Spirit, Southwest, JetBlue and American Airlines.

Most international Atlanta flight arrivals are from:

This will be most of the time with the carriers Air France, KLM, British Airways, Virgin Atlantic, Air Canada, or Delta Air Lines.

Some other options of international top routes:

Of course there are many more but just less frequently flown international routes.

There are a number of hotels near the terminal and many more options a bit north and south but still only a few miles away. With a shuttle service you can still reach the hotel or terminal in 5-10 minutes. Some options:

Hotels if want arrive or leave from the international terminal: