The airport started in 1973 as a regional airport. The first Dallas airport departures took place in 1974 at the beginning of the year. Many flights were initially operated only in the US. Later, international flights were added. In the 1980’s, the airport was also named International Airport. There is plenty to do and see at the airport. It could even be seen as a small town with a post office, restaurants, shops and a large hotel. Pre-pandemic, there were more than 70 million passengers traveling through DSW airport per year. In addition to the initial and final destination, the airport is also widely used as a hub. Fly from a small airport in the US to Dallas Fort Worth and then fly on to an international destination. International destinations go to Central and South America, Caribbean, Europe and Asia. The airport is also important in the context of freight transport. The surface is almost 27 square miles, with 5 terminals and 7 runways present.

The airport is located 24 miles from the city of Fort Worth and 20 miles from Dallas. You can easily get there by car. Check in advance from which terminal the Fort Worth departures of your airline departs and have you taken away by car. There is a curbside drop-off area where you can stand for a while. When picking up passengers, you can first wait at a cell lot before you drive to the terminal. You can do this after people walk away from a baggage claim. 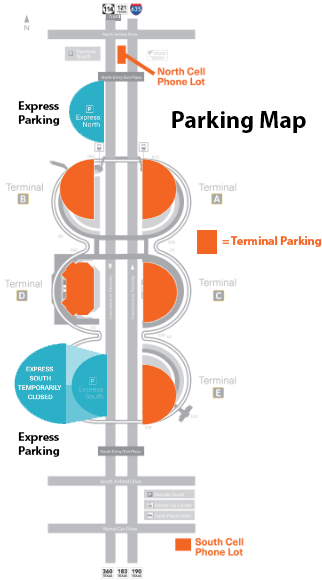 Dallas Fort Worth International Airport is huge and is usually abbreviated to DFW Airport.

There are five main terminals for all DFW Airport departures as well as 1 satellite terminal. Terminal A is fully used by American Airlines, both domestic and DFW international departures. Terminal B is the largest terminal and is used by American Eagle (American Airlines) for all short and medium haul flights. Terminal C handles all Fort Worth departures only domestic flights for American Airlines. Terminal D is an international terminal where many different airlines can be found such as British Airways, Korean Air, Lufthansa, Qantas, Aeroméxico, Air Canada, Emirates and a few more. Terminal E is a large terminal that is used for other American airlines such as Delta Air Lines, United, Spirit, Sun Country, Frontier. 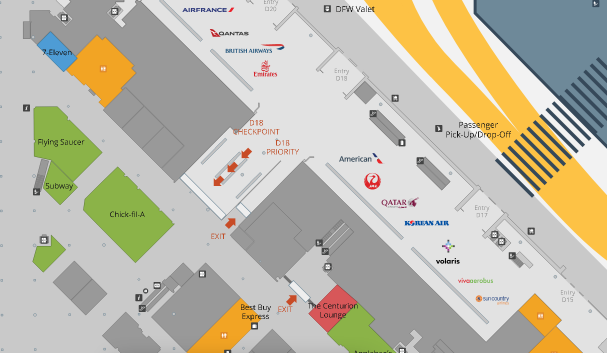 Most international DFW flight departures are going to the following airports:

More than 700,000 passengers use the route to / from London every year. The list is completed with routes to Tokyo (Japan Airlines), Frankfurt (Lufthansa) and Seoul (Korean Air).

The major DFW domestic departures are to Los Angeles are mentioned in the top 10 above. There are many other domestic routes as well. Some of these are Phoenix, Charlotte, Seattle, San Francisco, and many more).

The airline with the largest market share is American Airlines with almost 70 percent. In place with 9 percent is Envoy Air and in place 3 is Mesa Airlines with 3,957,000 passengers (7.63%) annually. In total, there have been more than 75 million Dallas Airport departures and arrivals in 2019. Due to the corona, this has dropped significantly in 2020 and 2021 and it will likely be years before passenger numbers recover.