About Dallas/Fort Worth International Airport arrivals

This is a main airport located between the cities of Fort Worth and Dallas. It offers domestic routes to almost all major cities in the US. In addition, there are many international flight options. There are also many seasonal flights to Central America and the Caribbean. In 2020 it was ranked 4th busiest airports in the world. Most flights are operated by the carrier American Airlines. It is situated on 17,000 acres of land. There are even 7 airports to manage all Dallas arrivals. There are also 5 terminals with almost 200 boarding gates.

There were already plans in 1927 to build this airport. The city of Dallas wanted its own airport and therefore started up Dallas Love Field Airport, among other things. There was a second chance in 1940 to open an airport together, but again things went awry a few years later. A third attempt in the early 1960s yielded more. Construction work finally started in 1969.

The first Dallas Fort Worth Airport arrivals took place in 1973 including a Concorde plane to Paris. The real opening came a few months later. It started as a regional airport but in 1985 it was given the name International. Over the years, the airport continued to grow and the Dallas airport arrivals increased. More terminals and runways were added. The facilities at and around the airport also grew and expanded.

The airport has five terminals (and 1 satellite terminal) and seven runways for Dallas airport international arrivals. The terminals are connected by means of the DFW Skylink, an automated people mover. The Skylink stops twice per terminal and runs in a circuit, in both directions, past all terminals. The airport has two train / light rail stations, one for the train to Dallas and one for the train to Fort Worth. The train to Fort Worth departs from Terminal B and the train to Dallas departs from Terminal A. 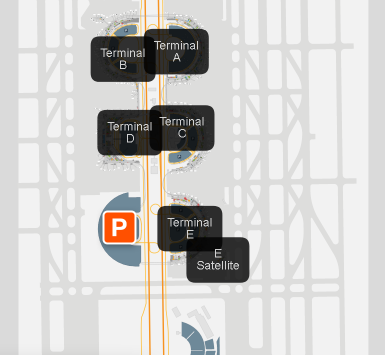 A new terminal called Terminal F will open around 2025. This will yield about 24 extra gates.

Terminal E (plus satellite) is the most used by Delta Air Lines, US Airways and Spirit Airlines.

Some international options you can take:

One of the most popular routes through the pandemic is in the US itself anyway. Most DFW arrivals are from Los Angeles and Chicago-O-Hare.  During this period in 2020 and 2021, most flights to Los Angeles, California will be operated by American, Delta and Spirit airlines. The top 10 list is completed with: