Cincinnati / Northern Kentucky International Airport (CVG) is an international airport located in Hebron, Kentucky country of the United States. It is the largest and busiest airport in the state. Delta Air Lines have most Cincinnati airport departures and this airport is one of the main hubs. It is the seventh most busy airport in the United States for cargo operations and one of three super hubs of DHL Aviations’ to destinations throughout the USA, Europe, Africa, and Asia. The CVG airport departures is also common for Frontier Airlines and Allegiant Air.

The airport was funded by President Franklin D. Roosevelt that was used by the U.S. Air Force for training during the Second World War. It was used by the Air Force until 1945 when the first terminal at the airport opened, and civil service from the airport began on 27 October 1946 with the first CVG flight departures. The first scheduled jet flight of the Miami Delta Air Lines Convair 880 was launched on 16 December 1960, at Cincinnati, or North Kentucky International Airport. The airport has been continuously renovated and expanded into one of the world’s top airports and to increase it’s Cincinnati departures.

Cincinnati / Northern Kentucky International Airport is located in the metropolitan area of Greater Cincinnati. The airport code CVG, comes to Covington city in Kentucky, from the nearest town on opening hours. CVG is 7,700 acres in area. Over 5.7 million passengers have Kentucky flight departures from Europe, America, and South America cities. The Northern Kentucky International Airport is owned and operated as a vital hub for Delta Air Lines and Ultimate Air Shuttle by the Kenton County Airport Board.

From Cincinnati you should drive south on either the I-71 or I-75. Then take the exit 185 and go to the I-275 Highway west to Exit 4B (State Route 212). Follow the signs to the airport terminals and parking facilities.

From the west you should follow the I-74 to the I-275 and from the south the I-71 or I-75. After either options take Exit 4B (State Route 212). Follow the signs to the airport terminals and parking.

Valet parking has moved to Ground Transport West. Fast and easy parking for $30 a day. However, the most commonly used options are those in the garage in front of the terminal. In the garage you have general parking for the most part and at C level with rows 28 and 29 you have premium reserved parking. This is the most convenient. It costs $22 per day and general parking is $18. You can also park a lot cheaper by choosing ValuPark or Economy Lot. This is 11 and 9 usd per day respectively. This long term parking option offers shuttle buses to and from the terminal. 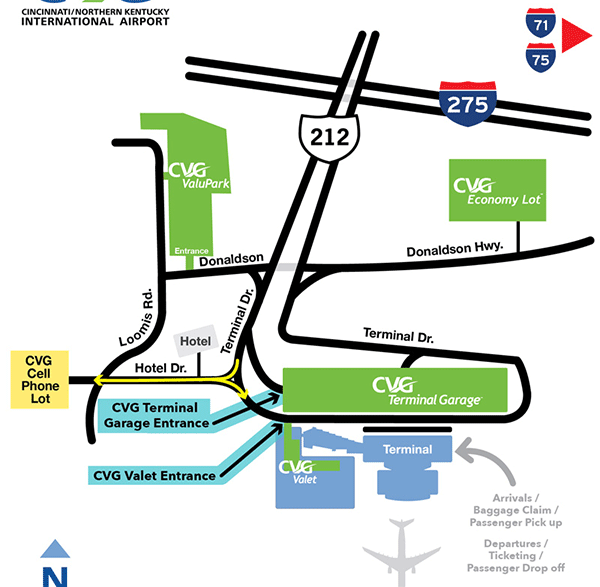 It is 900 ft above sea level and consists of four runways for Cincinnati flight departures. 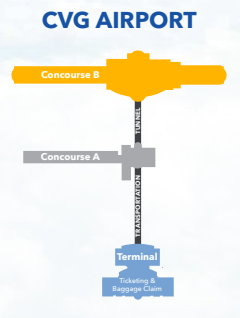 The airport terminal is dedicated to check-in counters, and some airlines have self-test counters to reduce airport traffic. Counters usually open 2 hours before domestic Kentucky airport departures are departed and 3 hours before international CVG flight departures. 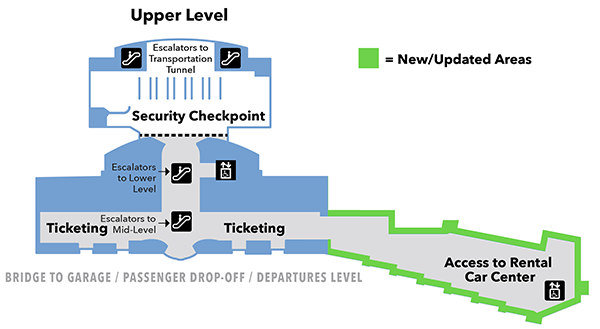 Facilities at the airport

At the Cincinnati/Northern International Airport some of the other facilities are free Wi-Fi internet access, public telephones, nine small conference halls, and special facilities for disabled people.

The most common American carriers offer flights from this airport. Those with Cincinnati flight departures are:

When seeing the CVG departures to other airports then Atlanta is most popular. This is also because it is used as a hub for Delta. Other frequent flown routes are:

When you look for cargo flights that most go to Anchorage followed by Leipzig in Germany, Belgium, Mexico etc. For more flight routes in the US most of them go to Miami and Chicago.

Some good options in Cincinnati South: