O’Hare International Airport is located 13 miles northwest of the city of Chicago. The airport has hundreds of O’Hare departures to various different destinations around the world. It is also one of the largest airport in the world over 84 million passengers per year (2019). Due to corona, there were considerably less ORD flight departures but luckily increasing again. The owner of the airport is the city of Chicago. It is operated by Chicago Department of Aviation. In addition to O’Hare, there is another major airport nearby called Midway Airport. That airport focuses more on domestic flights, despite the fact that it also offers international flights. The location of the Chicago O’Hare is on 7,600 acres piece of land. It has 4 passenger terminals and even 8 runways. Carriers for passengers and cargo all over the world come here. Yet only 3 airlines together have more than 60 percent market share. Those are SkyWest, American and United Airlines. 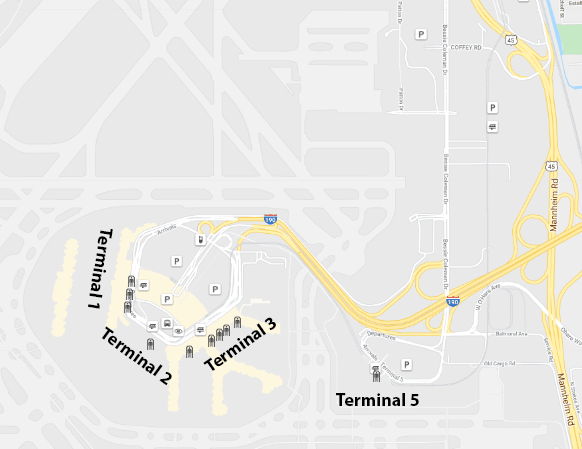 Traveling from the airport to the center and back can be done via various ways such as the train, bus, taxi, car rental or simply just your own car.

The most popular parking option is in the Main Garage. Here you have the choice to park on Level 1 Hourly or on the other floors (Daily Parking). Valet parking is also available. This Main Garage is located just in front of Terminal 2 and surrounding Terminals 1 and 3. There is also an uncovered outside lot in front of the garage divided into two parts, Lot B for Terminal 1 and Lot C for Terminal 3.

You can also park in a garage in front of the international terminal. This is Terminal 5, Lot D. This one is a lot smaller. If it is full, you can still go to the Main Garage and use a free shuttle to Terminal 5. Or park at Economy.

Economy parking is convenient for long term. These Lots are located near the MMF and can be reached with the AIRPORT TRANSIT SYSTEM (ATS). There is also a shuttle service that can take you from economy parking to the terminal. 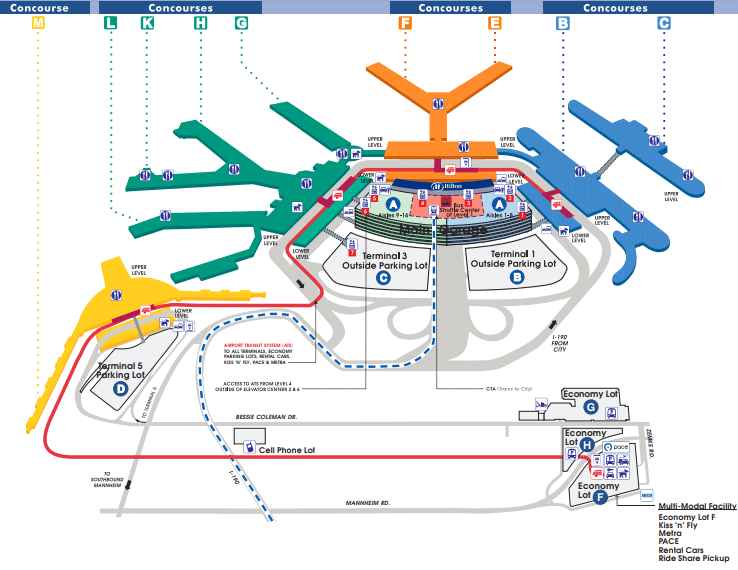 Terminals at the O’Hare airport

The airport has 4 terminals. Terminals 1, 2 and 3 are only for the domestic Chicago ORD departures (except United which also operates international flight departures at terminal 1) while Terminal 5 (the fourth terminal) is only in use for the international routes. Travel between the terminal can be on the Automatic Transit System (ATS) train that runs 24/7 every 5-10 minutes. 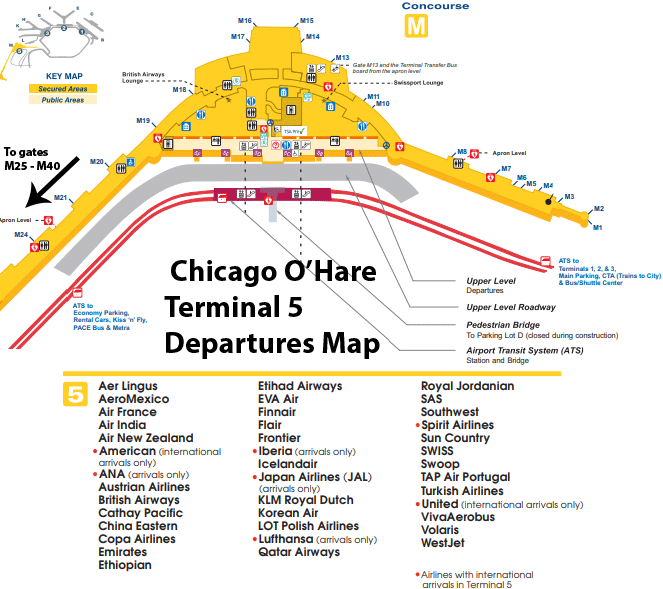 There are several lounges at each terminal. Some of these include:

There are no fewer than 8 options for Chicago Airport departures regarding the runways. All of them are between 7,500 and 13,000 feet in length to accommodate most planes in size to land or take off. All those millions of people deal with almost 1 million aircraft movements a year. There is enough capacity to grow further. Looking at the terminals, you will not be surprised that most O’Hare airport departures are domestic flights. Many routes flown are to

If you have an international flight, no one will be surprised that it is to London-Heathrow, flown with American Airlines, British Airways, United Airlines and Virgin Atlantic. Other popular international options are as follows:

The most obvious option is Hilton Chicago O’Hare Airport. This hotel is located just in front of terminals 1, 2, and 3. This hotel is also recommended if you have an international departure. There are many hotels to choose from in Chicago, including in the ORD Airport area. Most hotels can arrange a drop off at the terminal from which you depart with their shuttle service.