It is an international airport located northwest of the city in Illinois. It is operated by the Chicago Department of Aviation. Chicago airport is located on 7,600 acres of land. It offers both national and international flights. With over 80 million passengers, it is one of the busiest airports in the world. The carriers United Airlines, American Airlines and SkyWest together have more than 60 percent market share. In addition, there are many more local and international airlines that offer flights to and from Chicago O’Hare Airport. There are even 8 runways where Chicago ORD arrivals can be performed. There are also 4 terminals present.

Chicago O’Hare International Airport is located northwest of the great city of Chicago. The distance to the center is about 14 miles and can be reached by car in about 45 minutes. This route can be made by car via taxi for about 55 USD without traffic jams. You can of course also do this with a rental car after Chicago arrivals. Most well-known car rental companies are present at the airport such as Alamo, Avis, Fox, Sixt, Thrifty, Budget and Enterprise. There are also O’Hare arrivals of buses and trains from downtown Chicago throughout the day. Regional bus companies also go to surrounding cities such as Milwaukee. 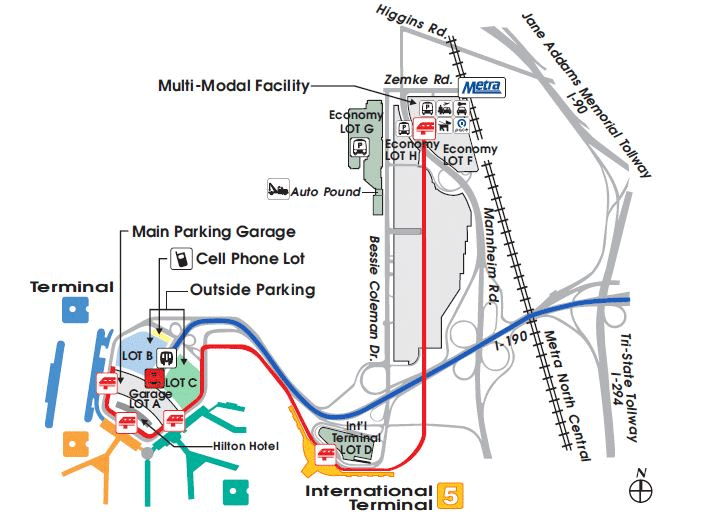 Before ORD airport arrivals, it can be useful to determine which terminal you should be in. There are four terminals at the airport. All domestic Chicago ORD arrivals are at Terminal 1, 2 or 3. The fourth terminal is Terminal 5 and slightly remote and is mainly in use for international Chicago Airport arrivals. There is an ATS (automated people mover) between the terminals to go from one terminal to another.

Chicago O’Hare International Airport has the most runways in the world. There are 8 runways and all can be used for medium and large aircraft. 54 million passengers were transported via these runways last year. That were almost 700 thousand Chicago O’Hare arrivals with many different airlines.

Most airlines seen are United Airlines (include United Express) and American Airlines (include American Eagle) which together have a market share of more than 50 percent. Other frequently seen airlines are Envoy Air, SkyWest Airlines and Spirit Airlines. ORD flight arrivals most often come from the following airports:

American airlines offer most flight routes. The busiest routes outside the US go all over the world. Most O’Hare arrivals come from London-Heathrow with the following carriers:

The other international destinations include airlines with: