Charleston International Airport is located northwest of the city of Charleston, 10 miles from the city center. It is the busiest airport in the South Carolina region. It is the focus city of Breeze Airways. However, most flights will be offered by Southwest, Delta and American Airlines to the airports of Charlotte and Atlanta. The airport has grown to 5 million passengers per year. There are two runways and one terminal.

Rental cars are often used after CHS airport arrivals. There are numerous companies such as Thrifty, Enterprise, Dollar, Avis, Alamo and Hertz to rent a car. Upon your return, there is a special Rental Car Pavilion to leave the car.

If you use the taxi, there is a 15 USD fee when you leave from the airport. They are directly in front of you when you exit the terminal. A cheaper alternative is Lyft or Uber, which also have a special place to drop off or pick up passengers.

The cheapest option is the bus with CARTA. These are located on the right side of the terminal when you exit it. After arriving by plane you will arrive at the terminal. Baggage claim is on the right as you enter the terminal. If you family or friends are picking you up, they will have to park on the left side of the building at the ‘Ride Share Passenger Pickup’ location.

Hourly Parking Deck: ideal for short term parking right in front of the terminal. Parking for an hour costs $3 and for the whole day it costs $21. Daily Parking Deck: this is recommended for mid stay parking. At $5 per hour and $17 per day, this is a good idea for a few days of parking. If you want to park longer than a few days, we recommend Economy Lot A. This is only $11 per day with a maximum stay of 30 days. For a pick-up only you can use the Cell Phone Waiting Area. Here you can temporarily park for free. 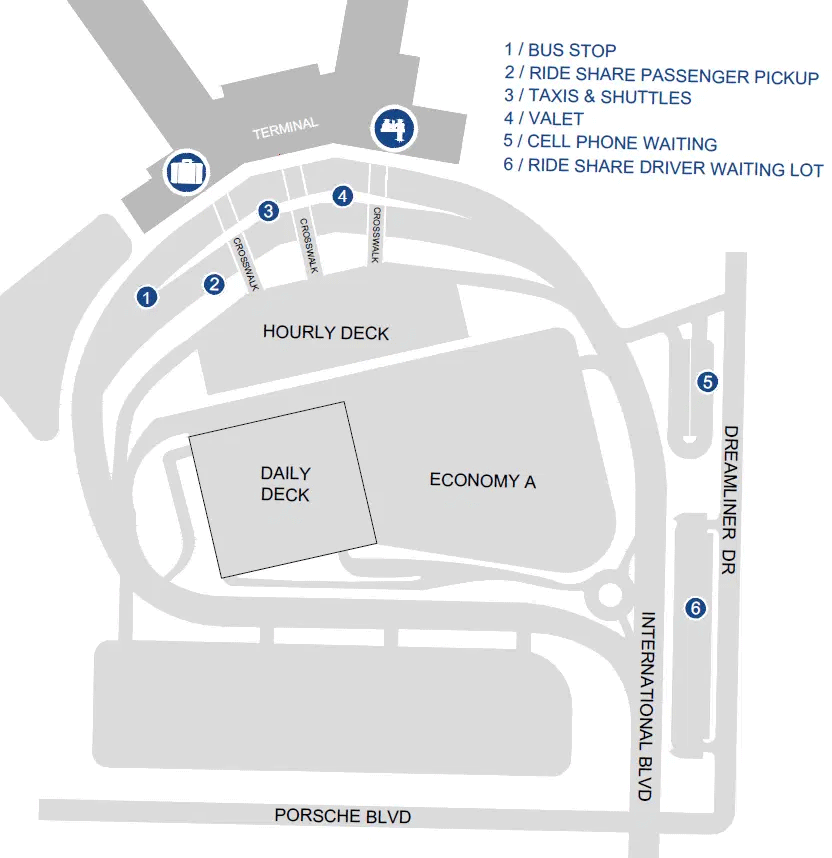 There are two runways of 7,000 ft and 9,000 ft for all Charleston international airport arrivals. The runways are in use for both civil and military aircraft.

The terminal of the airport consists of several parts. There is a military area, a Boeing assembly area and two general aviation areas. It is a fairly new building which was renovated in 2016. Several gates have been added and several renovations have been made to the terminal, which was completed in 1987. The Charleston arrivals are on the same level for passengers with a departure. When arriving you will end up in the west end of the terminal. You could have arrivals at one of the two available concourses (A and B). Not many international flights are handled, but the terminal is suitable for it.

The airport is mainly in use for domestic CHS flight arrivals. British Airways is one of the few to operate an intercontinental flight to Charleston Airport. Most Charleston SC airport arrivals are from Atlanta with the carriers Delta Air Lines, Southwest Airlines, PSA Airlines, American Airlines and JetBlue Airlines. Together they have a market share of 68%. There has been constant growth in passengers in the last decades. Corona will cause a significant dip in 2020 and 2021.

The busiest route is operated by Delta and Southwest to Atlanta, Georgia, followed by American Airlines to Charlotte, North Carolina. At an appropriate distance are the following destinations:

Most Charleston flight arrivals from different cities will be by Allegiant, including seasonal flights.

There are no hotels in the terminal or airport grounds. For that with a shuttle service to the hotel of your choice. Fortunately, there are many options nearby: