Boston Logan International Airport (IATA acronym: BOS) is the main gateway to New England, and to the city of Boston. The airport is only 3 miles northeast of the city of Boston. Boston is a large city in the United States (over 650,000 inhabitants). Even the metropolitan area has more than 6 million inhabitants.

It is one of the largest airport in the region with many domestic and international flights. Some other smaller airports nearby such as Albany, Providence and Portland.

The first flights were already in 1923. Then it was mainly used by the US Army and Air National Guard. It was not until a few years later in 1927 that the first passenger flights were made to New York. During the Second World War and afterwards, the airport was expanded with terminals that are still there today (Terminal B and C). During that period, the airport was also given the name Logan Airport after the officer Edward Lawrence Logan. After WW2, the Boston Logan arrivals from Europe were increasingly expanded. There were routes to London, Shannon, Lisbon, Glasgow, Paris Orly, and Frankfurt.

Over the years, the terminals and runways have been expanded and renovated. There are currently 6 runways available for small private aircraft up to cargo flights and the largest passenger aircraft such as the Airbus A380.

The airport has five terminals: A, B, C, and E. They are connected by a shuttle bus or accessible by foot. In any case, check before you arrive at which terminal you will have to check in. This means you will not have to rush last minute if you are in a wrong position. The following airlines will more likely have their  flights at terminal: 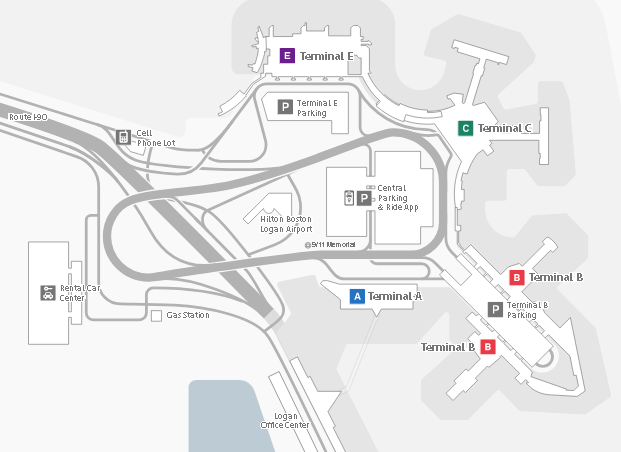 Most Logan arrivals within the US are from Chicago-O’Hare Airport. Last year, more than 500,000 passengers flew this route followed by Atlanta Airport. By far the most flights are between Boston Logan Airport and London – Heathrow Airport. Some 850,000 people flew this route with mainly British Airways, Delta Air Lines and Virgin Atlantic. JetBlue Airways carries the most passengers with 7,206,000 BOS arrivals from Logan airport there is a 33% market share.

As you can see in the picture below, there are more and more Logan Airport Arrivals each year. This enormous growth is possible with 4 terminals and 6 (2 smaller) runways. With more than 42 million passengers in 2019 it is a medium sized airport’in the US. 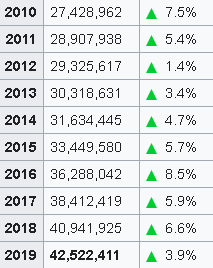