The UK’s third busiest airport is located south of the city Manchester. Manchester Airport has 2 runways and 3 terminals. The airport is located south of the city about 14 km/9 miles away. Manchester airport is the busiest airport after the London airports in the UK. With more than 80 years of experience, it offers many different airlines the opportunity to offer flights to destinations all over the world, but mainly to Europe. Some major carriers include TI, Virgin, Ryanair, Jet2, and Easyjet. Where it had a record year in 2019 with more than 29 million passengers, it was only 7 million in 2020 due to the pandemic.

The very first Manchester departures took place in 1929 in the Wythenshawe area south of the city. In the meantime, another aerodrome would be built. This soon turned out to be too small to handle international flights because of the larger aircraft. A new airport, called Ringway Airport, was to be built which eventually opened in 1938.

Not much later the scheduled flights stopped because of the world war to be used as a training center for paratroopers. The services were restarted in 1946. The increase in flights meant that the main runway had to be extended quickly and the terminal was enlarged. In fact, a few rides later, more than 160,000 passengers arrived at Manchester airport via the airport. The first transatlantic flight to New York was operated by Sabena Airlines. In 1962 a new terminal was opened with a system known as ‘pier’ or ‘concourse’. Five years later, the runway was extended again and now to 2,745 meters. This allowed such large and full aircraft to land that long-haul flights were possible without having to make a stopover somewhere. In the 1970’s and 1980’s, the number of passengers, flights, and airlines grew to new records.

A special domestic terminal with its own check-in facilities was built in 1989. A strategy was made to continue growing to carry 30 million passengers in 2005. Despite the construction of a second runway, a newly connected railway to Manchester Airport, and much other innovative work, this was unsuccessful. The old terminal 1 had to be repaired and improved in order to still meet the objectives.

Many MAN departures go to nearby cities such as Amsterdam Schiphol Airport and Dublin Airport. The south of Europe is also important for the seasonal holidays. Many Manchester flight departures go to Tenerife South, Mallorca, Lanzarote, Malaga and Alicante. Between these European cities, Dubai (with Emirates) is in second place in 2019 but during the pandemic they ceased many flights. Nowadays only 2 flights a day go to this destination of the United Arab Emirates. You are able to fly to Doha and Abu Dhabi in the region as well. All these are often used as hub to far east Asia as well. Just a few other popular cities you could fly to from Manchester Airport:

Then there are transatlantic flights as well. When you want to fly to the US or Canada you could have the following options: Orlando, Houston, JFK, and Toronto. For other options you could fly to the Caribbean. Many passengers use these routes to have a holiday. Especially during winter to escape the cold. Some of these destinations:

Flying to Amsterdam is possible with Easyjet and KLM while to Dublin the carriers Aer Lingus and Ryanair will cover the route. The southern cities in Europe are served by the airlines Easyjet, Jet2, British Airways, Ryanair and TUI Airways.

Terminal 1 and Terminal 2 are linked by the “Skylink moving walkways”. Terminal 3, officially opened in 1989 as Terminal A by Diana Princess of Wales, is connected to Terminal 1. 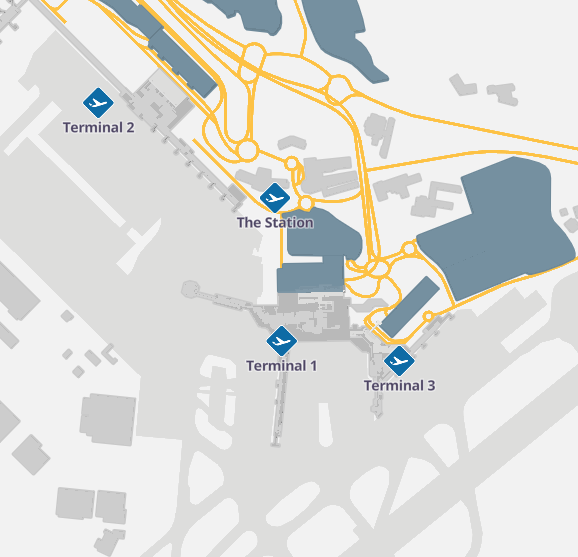 They have experienced a significant annual growth in passenger numbers in recent years. Unfortunately for the airport, there is a restriction on how many planes can fly per hour. With 29,374,282 Manchester Airport departures (passengers) and 200 thousand aircraft movements it’s one of the busiest airports of the UK.