Airport London Gatwick is located about 45 km south of the city of London. After London Heathrow it is the UK’s busiest airport, even though they only have 2 runways for Gatwick airport flight departures. This is often the reason why London Gatwick departures are delayed. Many major airlines such as British Airways and Emirates have Gatwick flight times over here, but also low budget airlines such as Easyjet and Ryanair. At the airport there are 2 terminals, called North Terminal and South Terminal. These are connected to each other via a monorail. This journey only takes a few minutes.

The first Gatwick departures took place in 1930 for a private club. This soon changed to a public airport with routes to Paris and Belfast, among others. A few years later, a terminal called Beehive was added. There was also a rail link which is today called Gatwick Railway Station. After the start of WW2, it temporarily became a base for the army that sent Gatwick airport departures with night-fighters into the air.

After the war, the airport had to be renovated considerably. Still, cargo and charter flights quickly returned. It immediately became the second largest airport in the city of London. Later in the 1950’s, the airport was even closed for 2 years to carry out renovations. New airlines and destinations were soon added. Many charter and leisure flights were transferred from Heathrow to Gatwick from 1963. The following year the runway was extended and the terminal enlarged to 9,300 square meters.

Ten years later, the runway was even extended twice to 2766 and then to 3098 meters. This also allowed larger aircraft to land and take off. Long-haul flights also became possible afterwards. In the 1980’s it even became one of the busiest airports in the world. The runway was extended again for a change and this time to 3316 meters. A new terminal, North Terminal, was also opened in 1988. As the London Gatwick departures continued to increase, the terminals had to be expanded. The baggage hall was enlarged and pier 6 was built.

In 2009 BAA’s airport was sold to GIP. There have been further innovations in the past ten years. It is so well organized that an airplane can take off or land every 63 seconds. To ensure that everything runs smoothly, airlines were placed in specific terminals. Both Easyjet and Virgin Atlantic offer flights in the North Terminal and British Airways in the South Terminal.

Which terminal you need to be depends on your London Gatwick Departure flight. Most flights at the North terminal are flying with Easyjet and Virgin Atlantic. At Terminal North there are 33 gates for boarding. There is also a gate that even the Airbus A380 can connect to the terminal. To check in, you can do regular check-in at Terminal North on Level 20 and self check-in at Level 10: 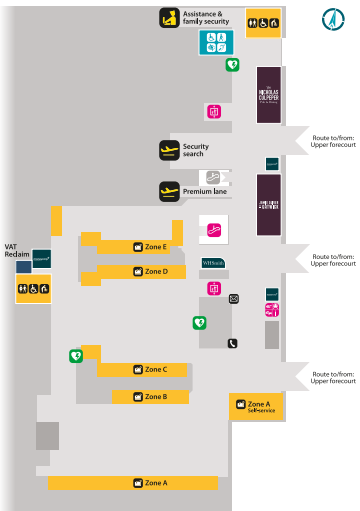 The airport is easily accessible by car or public transport. It is south of the town just above Crawley.