The airport is one of the largest and busiest in London and even the UK. Only London Heathrow carries more freight and passengers than Gatwick Airport. It is located on a 674 hectare area with two runways and two terminals.

The first Gatwick arrivals took place in the late 1920’ss. At that time it was still called an Aerodrome. A few years later, the first commercial flight arrivals and a real terminal arrived. During the war it was used by the Army. After the war, major renovations began on the runway, terminal and outbuildings. It quickly became London’s second major airport with many arrivals from British United Airways and Dan-Air. More and more routes were added after British Airways decided to also use Gatwick as a hub airport. There has been a long period with flights to the US because of an agreement with Heathrow, which meant that no flights could take place there. This was reversed in 2008. As a result, the intercontinental flights are often again at Heathrow. There are only a few long haul flights from Gatwick. The airport was sold in 2009 to Global Infrastructure Partners who subsequently sold shares to various parties.

Most London Gatwick arrivals come from the Spanish city of Barcelona. Like many cities in the UK, Dublin is also a very important destination for London airport. The top 5 Gatwick South arrivals are completed with the following cities:

Arrivals at Gatwick Airport have increased in the last 10 years. In 2019, 46,574,786 passengers made use of it for Gatwick arrival times. It was in 2020 just over 10 million. In total, these were 282,896 Gatwick airport flight arrivals. Important and frequently seen airlines are of course TUI Airways, Vueling, Ryanair, Emirates, Easyjet and British Airways.

London Gatwick Airport is located south of the city of London. From London there are many different A-roads leading to the M25. Once on the M25 you need to head south to the crossing with the M23. After about 8-10 km take the exit to Gatwick Airport. The airport is just above the town of Crawley.

It is relatively easy to reach by public transport. There are options by bus and train.

At London Gatwick arrvals you have the option of arriving at two different terminals, Gatwick North arrivals and Terminal South. Both terminals are also easily accessible with a monorail that takes a few minutes. At Terminal North, for small domestic and international Gatwick arrivals you can find baggage reclaim at Level 00. For Terminal South, this is at Level 10 of Level 20. 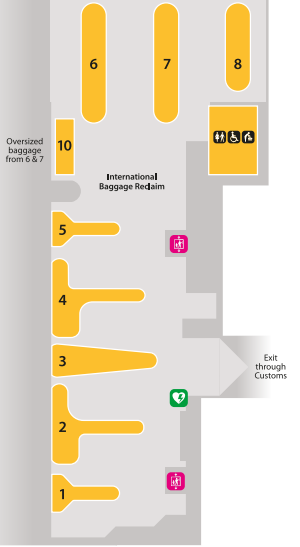 There are 3 hotels at the airport: