Airport Glasgow is located near the town of Paisley at a distance of 16 kilometers from Glasgow. Glasgow International Airport (Scots: Glesga Airport and in Scottish Gaelic: Port-adhair Eadar-nàiseanta Ghlaschu) in Scotland’s largest airport with nearly 9 million passengers annually using it. The owner of the airport is AGS Airports. The airport is largely used by the airlines Loganair, Easyjet and British Airways for Glasgow flight departures. With 1 runway, there are around 86,000 Glasgow Airport flight departures (total movements) annually. There are plans to expand the airport and to triple the number of passengers now by 2030.

Many flights to mainland Europe are not available in winter. Some possibilities to fly to the south are Tenerife South, Malaga Costa Del Sol and Alicante. If you want to go to other countries, you can also fly to the major cities of Frankfurt or Paris. There are also some flights with Ryanair or Jet2 to Poland. One of the few intercontinental flights going to the Emirates. There is a daily flight connection with Dubai International Airport.

During summer more flight routes will start up to different holiday destinations throughout Europe.

There are also regular (almost daily) flights to the islands in Scotland. Glasgow airport is in many cases a hub to get to those islands. These options are: Campbeltown, Islay, Tiree, Barra, Benbecula, Stornoway, and Kirkwall.

The location where the Glasgow airport departures now take place started in 1966. Soon there were many connections within Europe. A year later, the first transatlantic flight was also a fact. After a few expansions, more and more large aircraft such as the Boeing 747 arrived. In 1976 the capacity of the airport had to be increased due to the high demand for flights. Easyjet, which still offers one of the most flights today, started the first Glasgow departures in 1985. In 1989 there were new plans for expansions. There had to be a new international concourse with associated baggage hall and immigration area. The final opening took place a few years later in 1992. In 2004 a second terminal was opened with new check-in desks and additional gates. With a few innovations in the years that followed, such as a Glasgow airport departures lounge, the amount of airlines, flights and passengers continued to increase. In the year 2017, it set a record in number of passengers. The airport received 9.9 million passengers that year with the most flights to London.

There are 2 locations to check-in. This depends on whether you have a domestic or international Glasgow Airport departures. You can easily walk from one side to the other if you are not in the right place. After checking in you go through customs and security to the departures hall. In this hall you can also look on the screens at which gate you have to board. 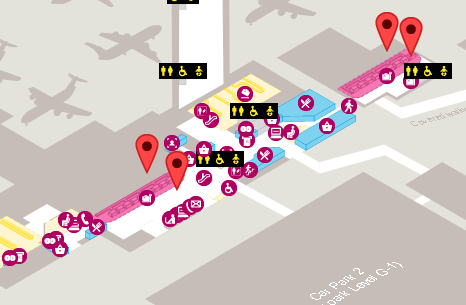 There are a number of lounges in the terminal. There’s the Champagne PIAFF at the Loch Lomond Bar. It is known for its view and premium service. Then there is the UpperDeck Lounge, British Airways and Emirates Lounge.

There are also several shops and restaurants. For example, you can look for nice accessories, beauty products, souvenirs, and fragrance. You can also enjoy a drink and snack at Beardmore Bar & Restaurant. Other places to eat are Burger King, Frankie & Bennys, Starbucks and others.

The best option for traveling by public transport is the Glasgow Airport Express service 500. Travel easily to the city center in 15 minutes by this bus service. There are several stops in the center such as North Hanover Street and George Square. It is a comfortable bus with plenty of space for luggage. There is also WiFi and USB charging points available. The price for an adult is £8.50. Another option by bus with multiple stops is route 77. Two other bus routes go to Fort William (915) and Paisley Gilmour Street (757).

There were plans to make a train connection with the airport. These are again in doubt because there may be an invention with the Metro system to the airport. If you want to travel by train then you should travel via Paisley Gilmour Street train station.

Other options for having Glasgow airport departures are taxi and car hire. There are car rental agencies located next to terminal 2.

If you want to park the car at the airport, you can do so at short-term and long-term locations. Park short term in one of the two garages (Car Park 1 & 2) just in front of the terminal. In Car Park 2 there is also the possibility for a Fast Track parking location. This is the closest to the terminal at 1 to 2 minutes walk. The other short term spots are also only a 2-5 minute walk away. Next to Car Park 2 there is also a pick up and drop off location, but you are not allowed to stop there after or before boarding passengers. If you want to park for a long time, you can drive to Long Stay. This is less than ten minutes from the airport. There are free buses to the airport. There is a departure every 20-30 minutes. This is the cheapest way to park the car at an official location. 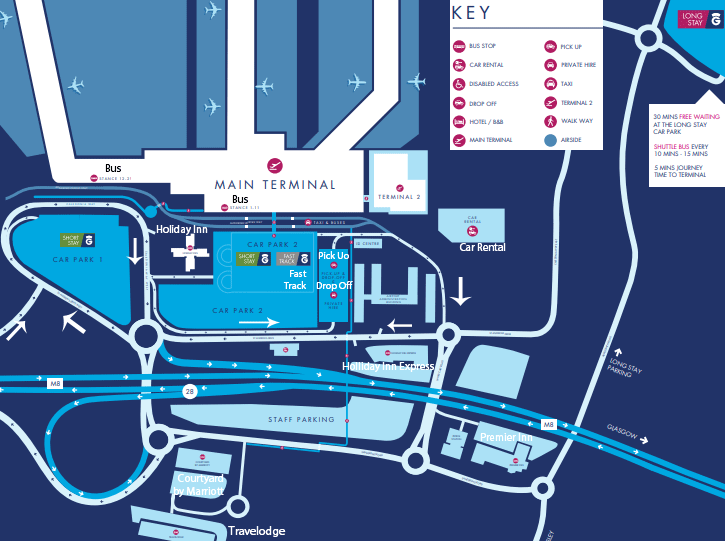 If you want to stay close to Glasgow Airport for an overnight stay, Holiday Inn Glasgow Airport is the most logical option. It is located opposite the terminal between the parking garages. Not much further there are a number of good hotels:

Are the aforementioned hotels full, are they too expensive or is there something else? Then there are a few possible options at a short distance: