Glasgow International Airport, also called on its Gaelic ‘Port-adhair Eadar-nàiseanta Ghlaschu’ or on its Scottish ‘Glesga Airport’. Not as the capital of Scotland the busiest airport you might expect it to be the busiest. Edinburgh Airport is a lot busier with 15 million passengers. All Glasgow arrivals are handled through 1 runway that exists. There are plans to expand, but it will take many years. Until then, GLA airport arrivals will likely continue to fluctuate around 9 million passengers per year (except 2020 due to corona).

About 25 percent of the Glasgow flight arrivals fly in from London, of which Heathrow and Gatwick have the largest market share. Other major cities in the UK are Bristol, Belfast and Birmingham. Of course there are also flights outside the UK. Before the Spanish holiday cities, the Scots fly most to Dublin with Aer Lingus Regional and Ryanair, Amsterdam Schiphol with Easyjet and KLM and Dubai with the airline Emirates. Glasgow airport arrivals from Spanish cities are Alicante, Palma de Mallorca, Malaga and Tenerife. The aircraft of the airlines of Jet2.com, Ryanair, Easyjet and TUI Airways are used for this. 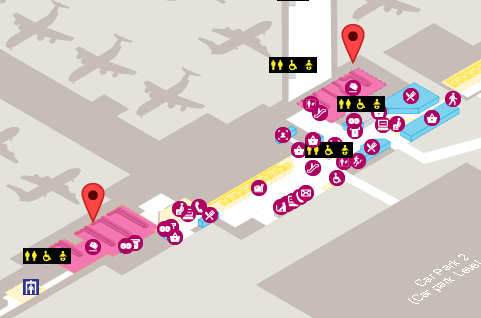 At Glasgow international airport arrivals, planes can park at various piers. It depends on which baggage hall you will have to be. There are 2 baggage claim areas so you can go at the main terminal via the passport control to continue your journey.