The airport was formerly called Robin Hood Airport Doncaster Sheffield. The location is southeast of Doncaster City in the Yorkshire area in the UK and it is 15 miles northeast of Sheffield. It is not a big and busy airport. About 1 to 2 million passengers use it every year but declining unfortunately. There are mainly low cost airlines flying from Doncaster Sheffield airport to holiday destinations. Many routes are therefore offered seasonally. Many of the flights are operated by TUI and Wizz Air. These usually go to the south of Europe where people enjoy a holiday in the sun. On average, 1 million passengers pass through the airport to use the offered flights. 2019 was a record year of 1.4 million passengers. There is 1 runway of 2,900 meters / 9,500 ft. There is 1 terminal that is fully equipped including hotel, car parks, etc.

It is a fairly new airport which had the first Doncaster Sheffield airport departures in 2005. It started as Robin Hood Airport with a few low-cost flights. As the Doncaster departures increased, the name was changed by petition to what it is today. The first Doncaster airport flight times were to Palma de Mallorca in Spain. The airport was owned by the Peel Group but sold the airport to Vantage Airport Group to return it a few years later. In 2016 it entered into a partnership with the Football Club Sheffield United. Then there was also a new airport road which ensured that you could be from the stadium to the airport in just 30 minutes. Since then, Doncaster has provided Sheffield departures for the football club.

There is only 1 terminal and also 1 runway for all Doncaster airport departures. With many car parks, a hotel, business park and shops, it has everything to offer passengers.

TUI Airways is based on this airport. It is therefore not surprising that they offer the most flights. These Doncaster Sheffield departures mainly go to holiday destinations in the south of Europe. Wizz Air offers flights to the east of Europe including the following cities:

Also some Spanish cities are popular to fly to such as Malaga, Mallorca, Fuerteventura, Tenerife South and the cities of Faro and Larnaca. Tui Airways also flies to:

There are also Doncaster flight departures to Antalya, Bodrum and Cancun during the summer season. 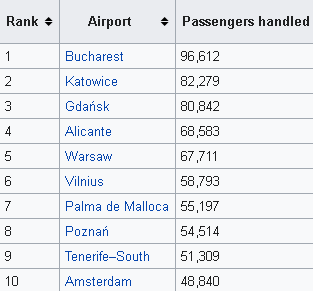 With a doubling in number of passengers in 2019 compared to 2014, they are doing well at Doncaster Airport. There are more and more Doncaster flight departures to many different destinations. Perhaps a bit unexpected but most of the passengers went to Bucharest in Romania. In terms of country, Poland is one of the most important with destinations like Katowice and Gdańsk. The first Spanish destination, Alicante Airport, comes in fourth.