Cardiff Airport is Wales’ only international airport (Cymru), located at the town of Rhoose. Cardiff Airport is the ideal airport if you want to visit the South or Mid Wales. North Wales can be reached more quickly via Liverpool Airport or Manchester Airport. The regional airport in Wales has a small terminal for all Cardiff arrivals. Many of the flights are operated by Ryanair, TUI, and Wizz Air. The planes mainly go to the south of Europe. Spain is often used as a holiday destination with flights to the coast or the Canary Islands.

About 1 to 2 million people fly from Cardiff Airport every year. As can be seen in the picture, there has been a lot of growth in the last years. Cardiff Airport arrivals from mainly European cities with Amsterdam Schiphol Airport at the top with 150,000 Cardiff flight arrivals. That accounts for almost 10% of the entire airport. 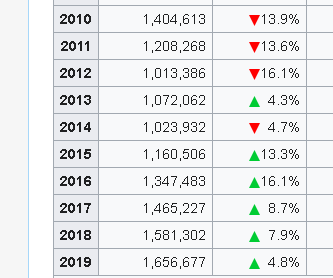 The first CWL airport arrivals were around 1940 and only later in 1952 for civil flights. With a new terminal in the following years, more routes and destinations were also added, such as to France. In the 1980’s there were even Cardiff Airport arrivals from Florida in the US. The growth to 2 million was good, but Ryanair decided to no longer depart or arrive from this airport. Therefore, the numbers fell back to 1 million. With a number of expansions at the airport and other low-cost airlines such as TUI Airways, Vueling, Wizz Air, but also Aer Lingus and KLM, the Cardiff flight arrivals rose again. In 2019 there were still nearly 1.7 million passengers, but unfortunately this has fallen sharply due to corona.

The busiest routes are the following:

Some other popular destinations, especially during winter months, are Lanzarote and Gran Canaria.

If you are traveling to Cardiff Airport the most important thing is to enter the postcode CF62 3BD into your sat nav. The airport is located 13 miles west of the city. You can easily drive to the terminal via the A4226 and B4265. If you drive yourself you can choose to go to the Meet & Greet, Pick Up/Drop Off or park the car at a car park.

Traveling by bus: The bus route T9 is a service that runs directly from the airport to Cardiff City and Bay. There is a bus every hour during the day and the frequency is less on Sundays.

If you want to go to the Rhose Railway Station you can take bus 905. That takes 10 mins for £1. Here too, a train leaves every hour during the week.

After arrival you can also opt for an official taxi. These can also be pre-booked with FlightLink Wales. Otherwise you can also arrange this at the airport when you walk out of the arrivals hall.

If you want to drive your own car after arrival, you can also choose to rent a car. There are several car rental companies such as Europcar, Avis, and Enterprise that can offer you a car.