Bristol Airport is located in the South West of England, close to Wales. The city of Bristol is approximately 11 kilometers from the airport. The airport is easy to reach by car or public transport. There are various parking options as well as Drop & Go and Meet & Greet. There is 1 terminal where both domestic and international flights are carried out. There is 1 runway available for all flights. There is also a Hilton hotel at the airport.

The story all started in 1927 when a number of businessmen raised money to build an airport. Because it was in Whitchurch it was called Bristol Whitchurch Airport. Until the Second World War, only 4,000 passengers per year used this civil airport. In order to continue growing after the war, the runway had to be extended. Because of the surrounding houses, there was no space. A new location was opened in 1955 which opened two years later. In the same year, 33,000 passengers were transported. After the Bristol departures increased, the terminal was also expanded.

In the early 1980s, more than a dozen airlines had flights to holiday destinations. There was even an international Bristol airport departures lounge, duty-free shopping and a 24-hour bar. The airport became increasingly crowded with more than 100,000 people and a new and larger terminal had to be considered. In the meantime, the airport was given the name International because of the many overseas departures. The new terminal finally opened in 2000. It grew rapidly to 3 million passengers. There was even a transatlantic service in 2005 with a route to New York Newark Airport. In 2008, 6 million people passed by. The facilities had to be expanded to a capacity of 10 million. Due to the pandemic, the airport was even temporarily closed in 2020.

Most BRS departures went to Amsterdam Schiphol Airport followed closely by Dublin. Edinburgh, located in Scotland, is also doing well in third place. After that come the Spanish holiday destinations of Malaga, Alicante and Palma de Mallorca. Flying to these Spanish cities mainly happens with Ryanair and Easyjet. For the top 3 cities this is also KLM and Aer Lingus. Some other options that many people like to fly to:

Bristol Airport has 1 terminal where all Bristol airport flight departures are handled. The check-in counters are on the ground floor. Then you will go to the first floor for the security check. From there you can go to the relevant gates for the Bristol Airport departures. All Bristol flight departures go through the only 2 km (6,600 ft) runway there is. There has been plans of enlarging the terminal, car park and taxiways to create greater capacity. However, this entire plan was canceled because BAAN voted against the plan. Without expansion, the airport has already seen growth in passenger numbers for 10 years. Aircraft movements, however, decreased in the last few years. This means better utilization of the aircraft. There were 69,434 Bristol Airport departures in 2019 with almost 9 million passengers. 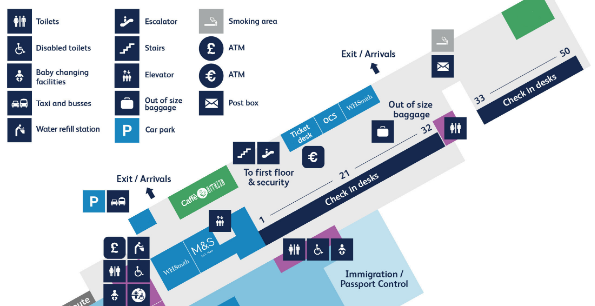