Bristol airport is located south of the city in North Somerset. It is a commercial airport serving mainly the people of Bristol city. It ranks in the top 10 busiest airports in the UK with nearly 9 million passengers a year. The airlines Ryanair and Easyjet operate the most flights. There is 1 runway and also 1 terminal.

The first airport near Bristol existed since the late 1920s. Not much later there were even 3 small airports around the city. The most important eventually turned out to be Whitchurch airport, which was also used during the war. After the war there were some more flights, but there was a lack of space to make the runway longer. The airport moved to a new location and was renamed Bristol Lulsgate Airport. A terminal and control tower was built. The runway was extended not much later. By the time it was 1980 there were even 17 different charter airlines. Still, the airport made a loss. With a new manager it turned a profit within a few years. An international Bristol departure lounge was also added in 1984. You could also go shopping with duty-free. A few years later, a new concourse was added to the terminal to accommodate more aircraft. Passenger numbers increased with a new renovation around the millennium. For the first time, it passed 2 million passengers a year. More airlines were added that started to use the airport as a hub, such as Ryanair. The numbers quickly rose to 6 and even 9 million in 2019.

The most popular route is to Schiphol Amsterdam followed by Dublin and Edinburgh. Behind that the Spanish cities will complete the list. These are Málaga, Palma de Mallorca and Alicante. Many of the Bristol Airport arrivals are with the low cost airlines like Easyjet, Jet2.com, Ryanair and TUI Airways. Important carriers for the routes Amsterdam and Dublin are KLM and Aer Lingus Regional. Some other busy flight routes:

Bristol airport has 1 runway of 2,060 meters (6,670 ft) for its Bristol airport flight arrivals. It is a short runway for an international airport. As a result, not the largest aircraft will land here. However, the Boeing 787 Dreamliner will pass by. There is 1 terminal with several floors. Bristol Airport arrivals will end up on the ground floor, both domestic and international Bristol flight arrivals. 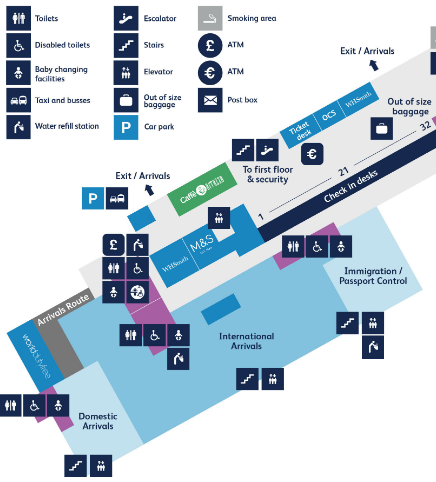 Bristol Airport is located southwest of the city of Bristol. It is half an hour driving to the center (Castle Park). The airport is most easily reached via the A38 road. Driving via the A370 you will easily arrive at the airport via Brockley Combe Rd.