Birmingham Airport can be easily reached by train or car / taxi (25 min). The location is southeast of Birmingham, about 20 km away. Arriving at the terminal, there is 1 large terminal (2 small ones have been merged). On the ground floor there are check-in desks divided into the left and right of the building with the arrivals hall in between. The first floor is mainly for security control and the gates before departure. 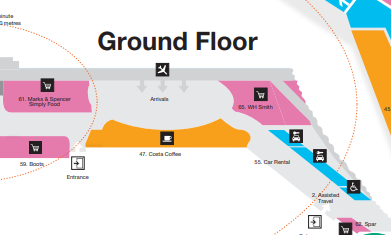 Arrivals are on the single 3,052-meter (10,013 ft) runway. Via this runway there are annually more than Birmingham Airport arrivals and departures with 12,639,340 passengers in 2019. By far, Dublin is the most flown route, operated by Ryanair and Aer Lingus (regional). Dubai (Emirates), Amsterdam (Jet2.com and KLM) and Paris (Air France) can also often be found on the arrival boards. The BHX arrivals from southern destinations come next with Tenerife-South, Malaga, Mallorca and Alicante. Birmingham Airport is widely used by TUI Airways, Ryanair, Jet2.com, Easyjet and Aer Lingus.