The capital of Northern Ireland has two airports: Belfast City Airport, which is located in the east of the city, just 3 kilometers from the center. It’s about the same distance from Belfast International Airport, which is much larger.

The airport has been around since 1938, but the first real Belfast City flight departures for public transport were not there until 1983. Belfast City Airport was given the prefix “George Best” in 2006, after the Northern Irish football legend who died that year. There is a relatively new terminal since 2001 for Belfast City airport departures. Expansions were planned, including the runway. Because this delay was delayed in 2010, Ryanair decided to shift flights to surrounding airports. However, other airlines took over the places and flight routes from Ryanair, so that the numbers of passengers remained around 2,5 million.

The last 10 years there have been many shifts in airlines and routes. Unfortunately for Flybe and the airport itself, the George Best airport departures were discontinued in 2020 and went out of business. Fortunately, Ryanair and eventually others has announced it will return again in 2021. The airport’s growth is held back by all the restrictions it has. This is partly because it is so close to the city. For example, no flights are allowed at night and there is a limit of 45,000 Belfast George Best departures. Due to the disappearance of Flybe and the pandemic, the numbers of passengers fell significantly in 2020 from 2.5 to half a million passengers. Most BHD flight departures go to London-Heathrow with Aer Lingus and British Airways. Most destinations are regional to^:

KLM has flights to and from Amsterdam to Belfast City. Ryanair will offer Belfast City airport departures to the south of Europe from summer 2022 with destinations such as Alicante, Barcelona, ​​Milan-Bergamo, Palma de Mallorca, Valencia, Faro, Ibiza and Malaga. 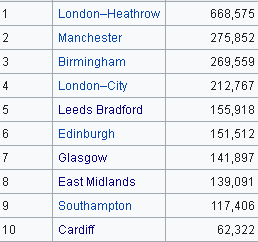 It is easily accessible by taxi or private car via the A2 which runs between Holywood and Belfast. Another possibility with Belfast City departures is the train and bus.