Aberdeen International Airport is located in a suburb of Aberdeen, 9 km from the center, which its location in Scotland. The owner is AGS Airports which also manages Southampton Airport and Glasgow Airport. It is the Loganair base that operates most of the Aberdeen departures. The first Aberdeen flight departures started in the year of 1934. During the Second World War the airport was used by the Royal Air Force. After that there have been so many expansions and innovations that you can no longer see what it was like at that time. It has become one of the busiest airports in terms of helicopter departures. With a new master plan, regular flights will also have to increase. There is still only 1 runway of 1,950 meters long for Aberdeen flight departures in addition to the 3 helipads.

The main terminal is equipped with the most necessary supplies with some hotels nearby and of course some shops. When you enter the terminal, the check-in desks are on the left. In total there are 24 counters to check in and start your Aberdeen departures. Then you go through the Security Search to the departures lobby to board at one of the 13 available gates. 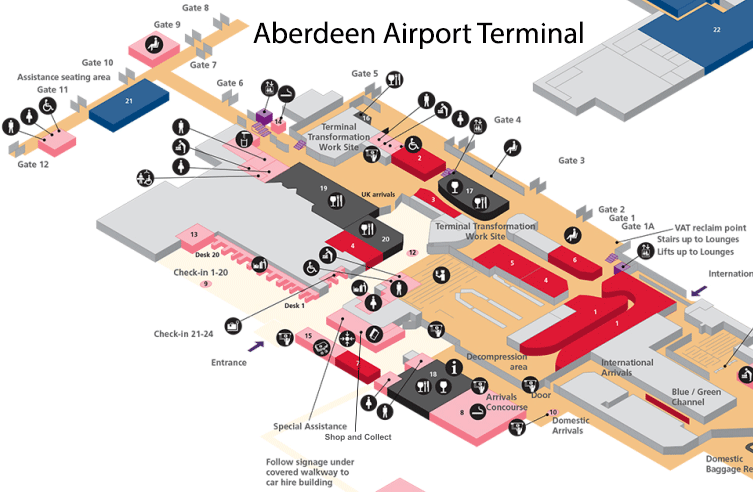 There are two lounges available at the airport. The airline British Airways has its own lounge for their members. This can be found on the first floor. There is access for passengers with fully flexible tickets and members of the BA Executive Club. Another lounge is the Northern Lights Executive. Here you have beautiful views over the runway and also tasty good and drink options. This is also available on the first floor in the departure lounge.

In addition to Loganair, flights are also in operation by the following airlines:

Most Aberdeen airport departures remain in the UK with London-Heathrow Airport as the main destination. Other destinations in the UK are:

There are also ABZ airport departures outside the UK. Many flights go to Amsterdam Schiphol Airport with KLM. Other busy routes are going to:

When flying south you could go to Faro or the Spanish destinations:

If we look back at the annual passenger traffic in the 1970’s, we can see a nice growth from just 100 thousand to 3 million passengers annually that make use of the airport. Due to the pandemic, it went back to just 1 million passengers in 2020. The Aberdeen departures will start to slowly increase again in 2021. 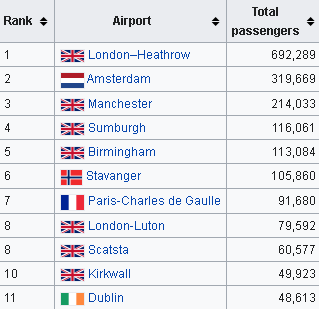 The airport is located 11 km from the center of Aberdeen. The most obvious options for this journey are the bus or taxi.

Traveling further by bus is best with bus line 727. These have Aberdeen airport departures to the center every 10 minutes. They run less frequently in the evenings and weekends. Rather, think about every 25 minutes and once an hour at night. Buses start and end at Aberdeen Union Square Bus Station in the city center. The journey takes about 40 minutes, depending on traffic of course and whether you stay seated until the final stop. You can buy a bus ticket from the bus driver. This one is £3.50 and 50% off for children aged 5-15. Under 5 is free.

Another bus route is bus 747. This has Aberdeen airport departures to Ellon P&R, Kingswells P&R, Stonehaven and Montrose.

You could also travel by train. Then you will first have to take a taxi or bus because the train station is 2 miles away. Bus X27 runs to this train station in Dyce. The train journey is operated by ScotRail with destinations throughout Scotland and Aberdeen.

If you want to travel by taxi, you can arrange this at the airport, but you can also book a taxi via the Aberdeen Airport website. To the city center takes about 25 minutes. The price is £15 – £20 and from the train station £8. It will cost a little more if there is a lot of traffic and the drive takes longer. You can pay with cash or credit card.

There are three options to park your car. These are Priority, Short Stay and Long Stay. The closest is Priority Parking. Walk into the terminal within a minute after you have parked the car. Ideal for a few hours or days. However, Short Stay is the most popular parking option. Park here for just £59.99 for 5 days (other number of days is of course also possible). Perfect if you want a weekend away for example. If you want to stay for a week or longer, we recommend Long Stay Parking. This is the cheapest option to park your car. For this location there is a bus transfer available that will be at the terminal in a few minutes.

You don’t have to look far for a hotel. There are several options for staying at Aberdeen Airport. Some of these include Leonardo Inn Hotel, Crowne Plaza, Courtyard by Marriott and Moxy Aberdeen Airport Hotel.