Abu Dhabi Airport is one of the fastest growing airports in the world. Up to 100 destinations are offered in more than 50 countries. In recent years, the airport has served an average of 20 to 25 million passengers. This will continue to expand with the plans that have been made and the new terminal that will be put into use. It is home to the airline Etihad which offers most flights and routes. 3 terminals are currently being put into use. However, a Midfield terminal (between the two runways) is coming, which should significantly increase the capacity of the airport. The Abu Dhabi airport is often used as a hub. Many people fly from Europe to Asia with Abu Dhabi as a stopover.

The first Abu Dhabi departures were already there in the 1950’s. Later, the current Al Bateen airport was added. Since Sheikh Zayed bin Sultan Al Nahyan did not consider it an ideal location because of the access roads, a new plan had to be devised. A piece of land east of the city was bought and used for the current Abu Dhabi International Airport. This one would be much more accessible from both out of town and surrounding cities such as Dubai and Al Ain. The new airport was inaugurated in 1982 for the first departures. There was 1 runway with a circular terminal. During the first decades, regular work was carried out at the airport to meet the high demand for flights and passengers.

Finally, in the year 2005, a second terminal was opened. It just doesn’t have aerobridges to the planes. It is currently largely used for low cost airlines. As it became increasingly crowded on the single available runway, a second one was built. Both are now 4,100 meters long and made of asphalt. The third terminal was completed a year later in 2009. It is adjacent to the first terminal. Flights are operated here by the main airline Etihad. Another terminal is on the way to significantly expand the capacity. It was originally supposed to have been delivered in 2017, but there have been significant delays. This is the Midfield terminal located between the runways.

Abu Dhabi International Airport is located east of Abu Dhabi about 23 miles from the center. You can easily take the bus / Etihad shuttle bus to the airport. You can also take a taxi and that costs about AED 60-70.

If you plan to drive yourself to the airport to travel yourself or to take someone away, you should know that there are several options. From the north, take the E11 or E311 highway. Just before you reach the airport, you drive on the E20. From the south you can also take the E11 or the E22 before you drive the last part back on the E20. You can also take the same E20 from the west. An alternative to traveling to the airport from the center of Abu Dhabi is the E10. Depending on which airline you travel with, you must be 1/3 or 2 at the terminal.

If you want to park longer, we recommend the parking lot of Terminal 2. This one is a lot cheaper. At terminal 1 and 3 you can park in SkyPlaza. The first hour costs 20 AED and after that 10 AED per hour. There are several floors in this parking garage. On Level 4 there are restaurants, toilets, and shops. From here you can walk to the arrival area of ​​terminal 1 or 3. At Level 3 you can walk to Terminal 3 Abu Dhabi departures area.

Once arrived at the airport there are AUH airport departures from 3 terminals. 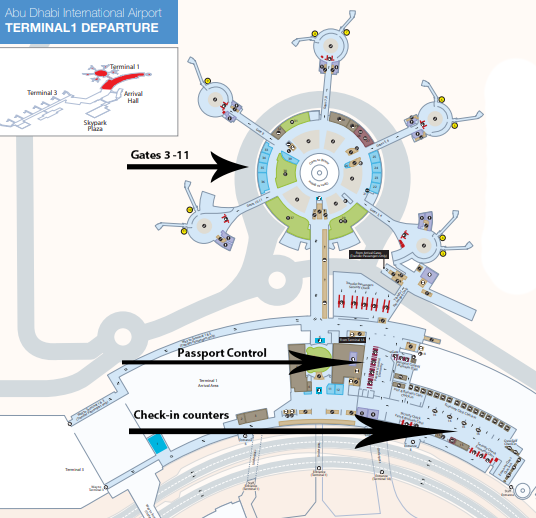 There are 2 runways of 13,450 feet each for all Abu Dhabi flight departures. Plans have been made to expand the airport. There should be a new terminal between the two runways present. The capacity could even reach 80 million passengers per year. However, that is still a long way off, but the growth of Dubai has also been rapid. There would also be an extra runway 1 mile away to create more Abu Dhabi airport departures.

With 21.1 million passengers in 2019, there is a small decrease from the year before. Then there were more AUH departures. It has remained fairly stable over the past 5 years. With the pandemic there have been a decrease since 2020. The year 2021 brought 5,260,000 passengers to the airport.

The largest market for Abu Dhabi is India, but also Saudi Arabia, UK and Germany and Pakistan.