Abu Dhabi International Airport is located 18 miles from the center of the city. It is a major airport in the area and is in the shadow of Dubai Airport. There are bus connections to the city or you can take a rental car or taxi to the center. A taxi costs 80 Dirham (25 USD).

There are 3 terminals at the airport. Terminal 1 is a somewhat older terminal with an AUH airport arrivals area with check-in and security at level 1. You have to go to level 2 for the gates to board. There are 14 gates in total over here. Terminal 2 is a small one-storey terminal. All Abu Dhabi arrivals of low cost airlines take place here. It is a bit further from terminals 1 and 3. There are free shuttle buses between the terminals. Terminal 3 has 2 floors with a baggage reclaim area on the ground floor together with customs and security. Level 1 is the departure area. 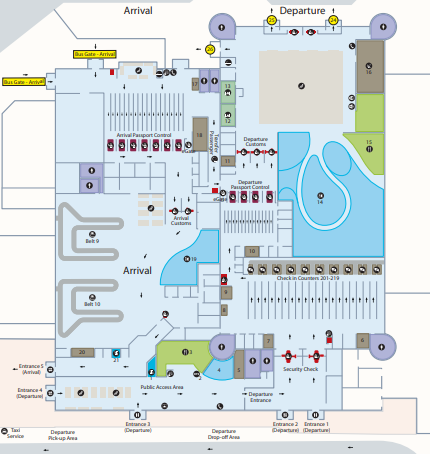 There are 2 equal runways of 13,450 feet where Abu Dhabi Airport arrivals take place. Last year there were 21 million passengers at the airport. That has been fairly stable in recent years. Despite this, there have been plans to build a new terminal and runway for years to expand and increase the Abu Dhabi flight arrivals. To date, it has been pushed forward, but should finally be put into use in 2021 this year.

In addition to the popular Etihad Airways, which provides the most flights, there are many other airlines that fly to/from the airport. An example is Wizz Air which will mainly offer Abu Dhabi airport arrivals from European cities from the east. There are also multiple routes to India by Air India, Go First and IndiGo. Other carriers at the airport include Turkish Airlines, Saudi, Pakistan Int Airlines, Airblue, Air Arabia, KLM, and a few others.