Istanbul Airport (İstanbul Havalimanı) has carried more than 52 million (2019) passengers on its 5 runways. However, this number is from April so it would actually go to the 70 million departures. The airport is new in Istanbul and has taken over the old airport called Ataturk in early 2019. The largest carrier is Turkish Airlines that has departures to destinations all over the world. ISL departures will stagnate in 2020 due to the corona virus after a good start in January 2020 with more than 5 million passengers. Ultimately, there were 23,409,132 passengers at the airport in the whole of 2020. Because corona is still prevalent, passenger numbers are still not what it was at the beginning of last year. 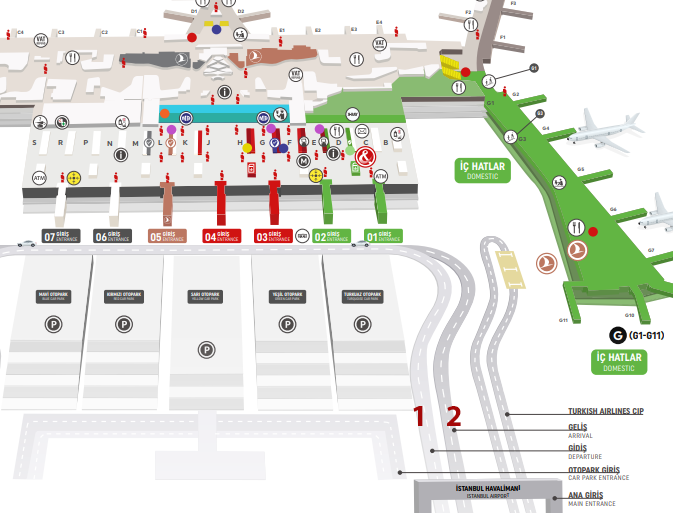 To go to the Istanbul Airport departures hall you have to follow the left driving lane (see picture: follow number 1). The airport consists of 1 terminal with a section for domestic flights and international destinations. If you have a domestic Istanbul Havalimanı airport departures you will have to check in at the first check-in desks of the terminal. Then you can go directly through National Departures Security Control and go to the concourse for domestic Istanbul departures. The second part of the terminal with check-in desks is for international airlines and flights and goes through passport control.

If you want to park your car in front of the ISL Airport departures terminal, you can do so with the price of around 3 USD for the first hour, 7.50 USD for 24 hours, 50 USD for 7 days. You can also travel to the airport by subway with a journey time of 30 minutes. There are several bus connections to the city of Istanbul as the cheapest option. There are also Istanbul Havalimanı departures by taxi, but they are a bit more expensive. You can be in the city in 40 minutes for about USD 35.