The airport is ranked 3 busiest airport in Thailand. It is located in the south of the Phuket Peninsula, some 20-30 miles north of the cities of Phuket, Patong, Karon and Kata. This can easily be done by taxi for 800-1000 THB but also by local bus.

The area is important to Thailand. It attracts many tourists, making it one of the busiest airports in the country. The beaches and nearby islands are especially popular. It is a focus airport for airlines like Nok Air, AirAsia, Thai Airways and Bangkok Airways. Most flights come from the capital Bangkok. The planes are filled with locals as well as international tourists who use Bangkok as a stopover to fly to Phuket. There are also international Phuket arrivals. Flights mainly come from Australia, Europe and Asia. These flights are year round from the major cities. From the smaller airports from other countries Phuket is often only flown in season. There are three terminals to ensure that all these flights run smoothly. However, there is only 1 runway. This one is long enough to land large passenger planes or cargo flights.

There are 3 terminals at this airport to handle the Phuket HKT arrivals. Terminal 1 is a new international terminal serving Phuket Airport international arrivals. There are several floors here with the Phuket arrivals hall, departure area with the gates, check-in counters and shops / restaurants. Terminal 2 is next to Terminal 1 and is easy to walk to. It is an older terminal that has been renovated. Ground level offers space for the baggage claim and Phuket airport arrivals area. Upper level is for check-in counters and gates to board. 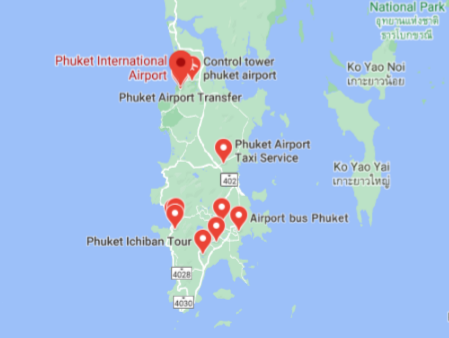 There is 1 runway at the airport, which is on the coast for all Phuket airport arrivals. Despite the fact that there is only 1 runway, there are millions of travelers who use the airport every year. There were 18,118,440 in 2019, a six-fold increase from 15 years earlier when there were only 3.1 million passengers in 2005. In terms of flights, that are more than 100 thousand Phuket arrivals.

There are more international flights (60%) than domestic flights (40%). This is partly because it is a beach destination without too many trips elsewhere in the country. Despite the fact that the destination is very popular with people from Europe and Australia, most Phuket flight arrivals are of Asian origin. Whether or not because of a stopover in one of the following destinations: