Bangkok International Suvarnabhumi Airport is located 30 km east the Bangkok city center. It is the busiest airport in the country with 65 millions passengers as a record in 2019. That would have been 2020 if the pandemic wasn’t com up. The trip to the airport from the center is by metro/train or taxi quite easily. Expect a price of 400-500 Bath by taxi and just a fraction of it by train/bus. From the airport there are Bangkok Suvarnabhumi Departures every 15 minutes by train to the center.

The airport was only opened in 2006 with the idea of ​​taking over the older Bangkok airport (Don Mueang). At a different location with much more space, this allowed the airport in Bangkok to continue to grow with many more international destinations. A large terminal was built with a 130 meter high control tower and 2 extra long runways. Soon more than 40 million passengers made use of the airport. Many low cost airlines and domestic routes started to complain about the costs at the new airport. For that reason, the old airport has been reopened after being closed for six months. Nevertheless, the passenger numbers continued to grow on average to 65 million in 2019.

The airport is centrally located in Thailand and an important point for flying to many domestic destinations. Many people from Asia and Europe also fly to Bangkok for vacation and to make a round trip. It also carries many Bangkok departures to smaller airports from international destinations to serve as a hub. Thailand has many holiday destinations, especially because of the beaches.

Once you arrive at the airport you will arrive at one of the largest terminals in the world. In addition to being an important hub for other cities in Asia or to Europe, it is also a final destination for an ideal holiday or for business. There are a total of 8 floors of which we mention the most important:

The terminal consists of seven wings: A and B are for domestic flights, C to G for international flights. Because the airport continues to grow considerably in terms of passengers, there will also be an expansion in terms of terminal and a third runway in the coming period.

There were more than 65 million passengers at Suvarnabhumi Airport in 2019. This was an increase of more than 3 percent compared to the year before. This was 380 thousand Suvarnabhumi Airport departures. That is a growth of 20% compared to 5 years ago. There is another airport near Bangkok (Don Mueang) that mainly handles the travel of the low cost airlines, both domestic and international. Yet there are still many domestic Bangkok Departures BKK to the destinations: 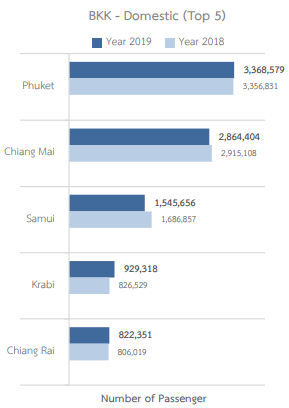 Flights are most often operated by the local airlines Thai Viet Jet, Thai Smile, Thai Airways and Bangkok Airways. There are so many other airlines available from other countries.

The international Suvarnabhumi departures are flying most of the times to:

Where many flights from Europe go via Doha or Dubai, direct flights can also be booked regularly. There are Bangkok Suvernabhumi airport departures to