Bangkok Suvarnabhumi Airport is Thailand’s busiest and largest airport. It is only in use since 2006 to take over the other airport at Bangkok (Don Mueang). Temporarily all traffic went over but most domestic travel went back due the costs. The airport is a little further away than the other at about 20 miles. By taxi, the ride to the center usually takes 30-45 minutes and costs about 400-500 baht. There are also Bangkok BKK arrivals by train from Phaya Thai Station. If you travel by bus, you can take the Airport Bus S1 if you are staying near Khao San Road. It runs every 30 minutes from 6am to 8pm.

The airport is located on 3,200 hectares. This makes it one of the largest airports in the region. It is an important final destination for many passengers, but it is also often used as a hub from Europe to fly to other destinations. To ensure that everything runs smoothly, a large terminal and 2 runways are used, a third of which is under construction.

The first Bangkok Suvarnabhumi arrivals don’t go far back in time. The airport was opened in 2006 with the largest freestanding control tower and fourth of the largest terminals. The airport was first tested by several local airlines before international flights were carried out. In the first half year, all flights were taken over from Don Mueang airport. Many low cost airlines begged to reopen Don Mueang because of the high cost at the new airport. After six months, many airlines and routes went back to the old airport. After the first year, some repairs had to be carried out on the taxiways due to small cracks. The current two runways allow 64 flights per hour. Due to the high demand from airlines and passengers who want to use the airport for their journey, a third runway had to be added. It should be put into operation in 2022. As a result, an additional 30 flights per hour could be handled. For the future expansion, there are plans to add an extra part to the terminal to handle domestic Bangkok arrivals.

The airport has 1 large terminal. It ranks fourth among the largest terminals in the world. With 7 concourses it has many directions that it is going up. Starting at the main section:

There are currently 2 runways for the Bangkok Airport Arrivals. Due to the rapid growth of the airport, the terminal is currently being expanded and a third runway is being built. As a result, there will be a capacity of 125 million passengers per year in order to compete with the largest (busiest) airport in the world, Atlanta Airport.

For the most part, the same destinations can also be seen a lot in the cargo volume list. 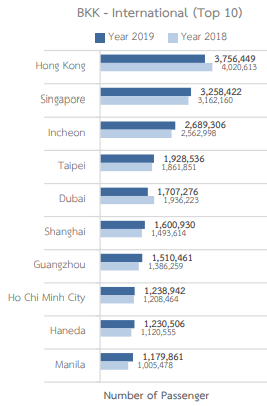 Many more flights are available. For example, you could fly daily to Mumbai with Go First. There are also options to fly to the capital of India. With the same airline you can also go to Delhi India Gandhi Airport every day. There are many direct routes to Europe, but also those that go via Dubai (Emirates) and Doha (Qatar Airways). The busiest air routes to Europe are: