The majority of the Basel Euroairport departures are European leisure and to metropolitan destinations. Euro Airport is also one of the few airports in the world that is jointly operated by two countries. The international treaty of 1949 governs this airport. Its headquarters are in Blotzheim, France. The Board of directors in the airport consists of eight Swiss and French members and two German advisors. The airport is split into two sections for Basel Mulhouse departures: French and Swiss. In terms of customs, police work, and medical care, the Swiss section is regulated by Swiss rules. 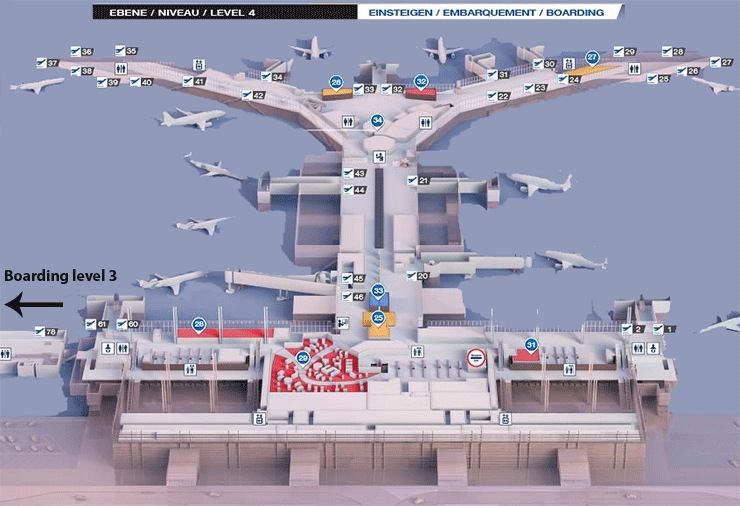 There is only 1 terminal at the airport. However, this terminal has 4 floors where car park, arrivals area, check-in on Level 3 and Basel departures gates at Level 4. There are separate areas for Schengen and Non-Schengen flights. The terminal is also divided into two parts, a French part and a Swiss Part.

The airport has grown considerably in the last 10 years. The Euroairport departures have doubled over time. In 2010 there were still 4 million passengers and in 2019 more than 9 million. In 2020 and 2021 there is a significant decrease due to the corona virus. Most Basel flight departures under normal circumstances go to Amsterdam Schiphol Airport. Other popular routes are going to:

Euro Airport is a hub for carrier fleets flying to a variety of destinations. Belair and EasyJet Switzerland use it as a hub at the moment. It also manages airline arrivals and Basel airport flight departures, including the following:

How to check in?

EuroAirport offers a variety of check-in options to its travelers. The following are the details:

The baggage allowance varies by airline, so travelers can check with their airline before checking in to learn about their baggage requirements before they have Basel flight departures. This saves a some trouble at the airport and extra unexpected money.

The airline determines where you can be. When booking or checking in, inquire about the airline’s seating arrangements and options.

While Euro Airport services several low-cost airlines, resulting in lower fees, it is always a good idea to check the flight fare from your preferred airline before booking.

Passengers are asked to fill out the following details on these cards:

Although an immigration stamp is not incorrectly not affixed to the traveler’s passport by the counter officer at the immigration checkpoint, the passenger may immediately contact the concerned to have it affixed to his or her passport to avoid inconvenience while having Basel departures again.