Seville Airport or in Spanish: Aeropuerto de Sevilla. The airport is located in the south of Spain and east of the city of Seville. It is an important airport in the south of the country. Millions of passengers use it every year. There were even 7.5 million passengers before the pandemic. It is mainly used by the low cost airlines such as Ryanair and Vueling. Most flights go to Spanish cities and some major cities in other countries in Europe.

It is easy to travel to the city in about 15 minutes by car. Another option is to travel by taxi to/from the airport. It’s about 25 euro’s. Traveling by bus will be a lot cheaper but you have to be less flexible of course. The price is just 4 euro. The first buses start around 5 am until 1 am. So even with late Seville airport departures you are able to travel by bus.

Seville airport is a medium sized airport in Spain that can transport up to 10 million passengers. The journey begins upon entering the terminal. There are 42 check-in counters available. However, you will have to look at the signs at which desk you should check in. Often every flight has its own check-in counters. Sometimes the destination does not matter and you can check in at the airline desk. After checking in, walk to the right side of the building. There is the security you have to go through. This will take you to the Seville airport departures hall. Once there, look again at the signs at which gate you need to board. There are a total of 16 boarding gates. 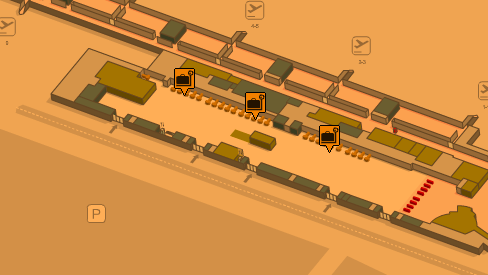