The airport is one of the busiest airports in Spain. It offers many domestic flights but also international flights in the south of the country. It is home to Ryanair and Vueling who together offer the most flights. Most flights go to European cities, but some also to North Africa. Millions of passengers travel through the airport every year. There are 23 aircraft stands for boarding. Most of them are not directly connected to the terminal. There are always improvements at the airport. They are currently working to increase the capacity to carry even 10 million passengers per year.

The first Seville arrivals already took place in 1914. That was still at the airport of Tablada. The first route was to Morocco. The airfield was quickly expanded and used by the Military Aeronautical Society. A few years later, the first Seville airport arrivals for commercial flights started. Most flights were between Seville and Madrid. Not much later, the Postal service also made use of the aircraft. There were also ‘international’ flights with a route to Lisbon. Slowly, the network expanded with destinations such as the Canaries, Berlin, Las Palmas and more. After the Second World War, construction of the current airport was started. Tablada airfield was then only used for military purposes.

In most cases, the easiest way is to travel to and/or from the airport by taxi. There is a standard price of 22.81 euros during working days between 7 am and 21 am. During weekends and holidays it can rise to 25.43 or even 31.78 euros.

A cheaper option is to travel by bus. From the center to the city, the route by bus is available from 4:30 to 00:30. Departures after early Seville Airport arrivals can be made from 5:20 am to 1:15 am. The price for a single route is 4 euros.

The airport of Seville has 1 large terminal with 2 floors. The Seville Airport arrivals are on the ground floor. After arrival you first come to the baggage claim and then go through customs. Once outside there are various services such as banking, cafe, information points etc. and to the car rentals, bus and taxi area. First level is for Seville Airport departures with all check-in desks. After the passport control, there are also various services to withdraw money, information counters, shops and food and drinks. 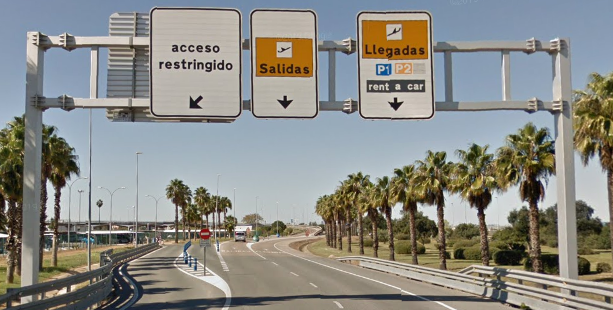 Most Seville Airport arrivals come from Spain, followed by Italy, France and the UK. Last year, 64,112 planes arrived and took off at Seville Airport. These planes, mainly from Vueling and Ryanair, but also Transavia France, Air Europa, Iberia, brought a total of 7,544,357 passengers via the airport. This is a plus of 18.2 percent compared to the year before.