The only airport in Menorca is in the southeast of the island, southwest of the capital, Maó-Mahón. The Me-1 is located near Menorca Airport, this road connects the west and the east (Mahón) of Menorca. The island’s name is regularly written differently, namely as Minorca. Since 2012, the official name of the capital is Maó-Mahón and therefor people look for Mahon airport arrivals. Sometimes people use only the name Maó (Catalan) or Mahón (Spanish).

The distance to the city center is only 5 kilometers which is a drive of no longer than 10 minutes by car. Taxis are widely used on the island, so you will have no trouble finding one. For a taxi ride from the airport to Maó-Mahón you pay € 13. If you want to travel by bus then you can go for line 10 which has Mahón arrivals from the airport.

The first Menorca flight arrivals took place in 1969. At another location of the island there were flights at San Luis Airport much earlier. The terminal also underwent renovation in 2006 due to damage from heavy rain water. There are a total of 16 gates at the airport for the Menorca arrival. Of these, 5 are linked by a jetway.

Menorca airport arrivals hall with baggage claim is on Floor 0. To start your travel you should be on Floor 1 for ticketing. There you can check-in and go through security to end up at floor 2 for boarding at the gates. 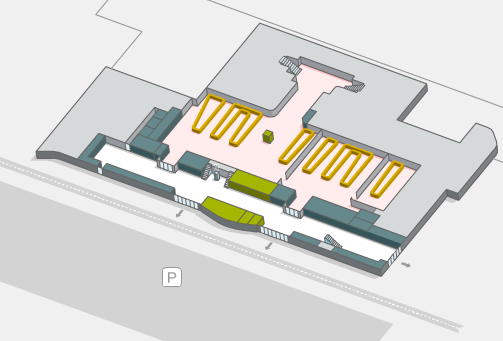 Due the pandemic most Menorca flight arrivals are domestic. Popular routes are to:

Other regular flights from other European countries are from:

In the summer months of 2021, flights will increase again to this holiday destination. Then there will be many more flights to that airport like from Vienna, Turin, and other London airports like Heathrow, City LCY and Luton.

You could also flight the routes to destinations like:

There are quite a few Menorca airport arrivals from Spanish cities, but this will gradually increase again. Then there will again be routes to:

Menorca Mahon airport arrivals have been fairly constant since 2000. However, it has grown over the last 5 years. The aircraft movements only increased a bit but the occupancy in the aircraft has increased considerably. There were almost 3.5 million passengers at the airport in 2019. As indicated earlier, this will be a lot lower in 2020 and probably in 2021.