The official name of the airport is Málaga – Costa del Sol Airport since the year 2011. It ranks fourth among the busiest airports in Spain. In 2019 there were almost 20 million passengers with 72 thousand Malaga flight arrivals. Due to the pandemic, the number of AGP Malaga airport arrivals has dropped significantly to 30 thousand with more than 5 million passengers in 2020. The airport is located 5 miles southwest of the city. It is also close to the popular resorts of Torremolinos. Due to its location, the airport is mainly in use for tourists. Only 15 percent of the flights are domestic AGP arrivals. It is a base for the airlines Air Europa, Vueling, Easyjet, Norwegian and Ryanair.

As said before, the oldest airport in the country. The first Malaga airport arrivals came from Barcelona, Alicante, Toulouse, Tangier and Casablanca through the carrier Didier Daurat. There was only 1 runway for all Malaga arrivals until 1960. This was enlarged and expanded with various technological systems. A new terminal was built in 1968 with a second one a few years later. Since then, seasonal holiday flights have increased. Another new terminal was put into use in 1991, which is now called Terminal 2. In the years since then, more and more runways have been built or extended and terminals replaced to what they are today. 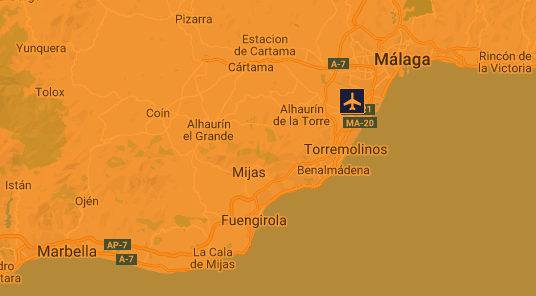 There are currently three terminals for all Malaga flight arrivals in 2021. Two of these are in use for passengers and one for Cargo flights. The airport is also often used for Marbella airport arrivals as well for its location. There are other beach destinations on the south coast of Spain as well. Terminal 2 consists of concourse B and C with a total of 23 gates. Most non-European flights are at terminal 2. Concourse D with 20 gates and 12 air bridges offers AGP arrivals at terminal 3 to process Schengen flights. 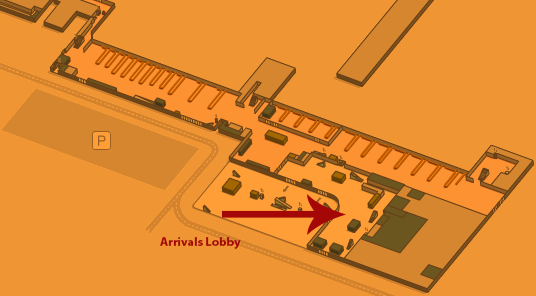 Destinations and airlines at Malaga Airport

The Malaga Airport Arrivals are on floor 0. For a departure with check-in counters you should be on floor 1. Most Malaga flight arrivals are with the carriers:

In addition, there are also regular Malaga airport arrivals with Aer Lingus from Cork and Dublin.

Other airlines with flights to Malaga airport are:

You could use the following coordinates to drive to the plane: 36.675653,-4.490974. Of course you can also simply type ‘Malaga Airport’ in the navigation system. The airport is located 9 km southwest of the city of Malaga. The town of Torremolinos is even closer.

After you experience Malaga arrivals there are plenty of choices for a car rental company. A couple national ones besides all the bigger brands like Enterprise, Hertz, National, and Alamo. You can find the counters of those companies in the terminals 2 and 3. However, we recommend renting a car in advance for the best price and car guarantee.

Travel by taxi if you want to get to your final destination quickly. In 20 minutes you are already in the center. If you walk out of the terminal after Malaga airport arrivals, many taxis are waiting for you. Some taxi companies are Taxi Union and Unitaxi. To the center of Malaga costs about 20 euros. If you want to travel a little cheaper but with the same convenience, you can use shared rides such as with Cabify and Uber.

A faster option to get to the center is by train. This one only takes 12 minutes. Other towns in the area such as Benalmadena and Fuengirola are also within easy reach. If you travel to Malaga, in most cases it is best to get off at Centro Alameda. The price for this trip is 2 euros. Tickets are for sale in the terminal.

You can also travel by bus. With the A Express Line you are in the city in 15-20 minutes. There are buses every 25 minutes between 7 am and 00 am. A ticket costs 4 euros. There are also intercity buses to Marbella, Estepona, and Nerja. Long-distance buses are also available. Arrivals are possible in Seville, Granada, Motril and Algeciras.