The airport is located 14 km northwest of the capital Madrid in the Barajas region. The official name thanks to the location (Barajas) and a former prime minister (Adolfo Suarez). It is the busiest and largest airport in Spain. It is also among the top European airports with a record year in 2019 with 61.8 million passengers in that year. Due to the pandemic, that was 17.1 million passengers in 2020. Most flights are operated by Air Europa and Iberia, both of which are Spanish airlines. Ryanair also offers many routes. There are 5 terminals and 4 runways to transport all those millions of passengers.

The construction of the airport in the Barajas district started in the year 1927. The opening was 4 years later with the first Madrid airport departures although not yet for commercial flights. This only happened a few years later. At that time, the terminal only had a capacity for 30 thousand passengers per year. The flights were initially still on a grass runway. The paved runway was only built in 1944 with a length of 1400 meters. A few years later, a few more runways were added. In addition to the European flights, there were also intercontinental flights to the Philippines and Latin America, among others. Scheduled flights to New York were started up and it all resulted in a new terminal. Growth continued with larger aircraft and increased traffic. It was not until the 1990s that a major expansion with a control tower, cargo terminal and a passenger terminal was added, which is the current terminal 1. There was also a new runway of 4400 meters long. This is one of the largest in Europe. This century there were also new expansions. Terminal 4 was built and opened in 2004. This is currently one of the largest terminals in the world. This is mainly used as the home base of the airline Iberia.

Madrid Barajas Airport (IATA abbreviation: MAD) is a vast airport and consists practically of two airports that are totally different from each other. The old airport consists of the connected terminals T1, T2 and T3. Madrid airport departures to European destinations are here. T4 was built a few kilometers away. This terminal is connected to the old part by the metro and shuttle buses. Close to T4 is the T4S satellite terminal for Barajas flight departures, connected to an underground shuttle train from T4. T4 is used for intercontinental flights and by airlines affiliated with Oneworld such as Iberia, British Airways, Vueling and American Airlines. 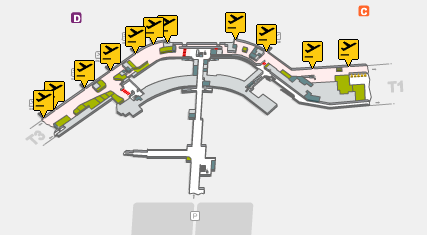 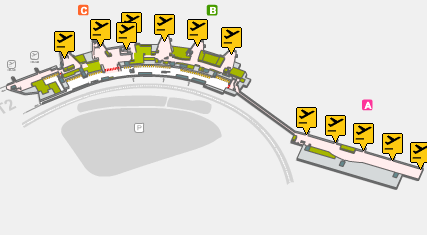 Since the huge expansion in 2006, the airport can also count itself among the largest in Europe and the world. Almost 62 million Madrid flight departures (passengers) are there each year. Although a large proportion are  domestic flights, Madrid Airport departures are going to many intercontinental destinations with a large network in Latin America.

Madrid airport departures Iberia: Iberia operates by far the most flights (more than 16 million in 2019). The main routes are to the following cities:

Other airlines with many Madrid flight departures are Air Europa, Ryanair, Easyjet, Vueling, Lufthansa TAP Portugal, British Airways, Alitalia, Norwegian Air. Not only destinations in Europe are important, you also see a lot of intercontinental routes on the radar. There are many Madrid Barajas departures to JFK-New York, Bogota in Colombia, Buenos Aires, Mexico City, Lima in Peru, Sao Paulo, Tel Aviv, Havana in Cuba, Santiago in Chile and other US destinations such as Miami, Newark, Washington -Dulles, Atlanta.

There are Madrid Barajas departures by train, subway or bus. If you go by train, you can do so at terminal 4, which travels to the north or south of the city.

By subway you can travel to the business district which is outside the center (Nuevos Ministerios). Here you change to another metro to the center of Madrid. You are probably the cheapest out of it by bus. The Express Aeropuerto travels to Plaza Cibeles or Atocha train / metro station.

Of course you can also take a taxi to the center, this costs about 25 euros. If you want cheaper Madrid departures you can choose Rideshares like Uber.