The airport is the busiest in the country of Spain with 17 million passengers in the year 2020. It is located on more than 3 thousand hectares of land, making it one of the largest airports in Europe. The location is northwest of the city of Madrid. The airport has been given the name Barajas because of the location where it is located. There are some airlines such as Iberia and Air Europa that operate by far the most flights from Madrid Airport. These flights are operated from 4 different runways. To achieve this, there are 5 terminals to get passengers on and off the planes.

The first arrivals date back to 1931 in the Barajas district. Commercial flights were not carried out until a few years later. A Dutch Fokker plane flew from Barcelona to Madrid. Because it quickly became busier, renovations and extensions were insurmountable. A paved runway became necessary and was built in 1944. Ten years later, there were already 500,000 passengers a year. This meant that a new terminal had to be built. That terminal is the current terminal 2. A cargo terminal was also built and more parking spaces for aircraft. It was not until 1965 that Madrid Airport was given the name Barajas.

Travel by metro to the airport: If you want to travel by metro from the center of the city of Madrid to the airport, the station ‘Nuevos Ministerios’ is a good starting point. If you have a departure from Terminal T1, T2, or T3, you can arrive with five stops. After this comes Barajas station and then Terminal 4. Some more stops in between are Colombia, Pinar del Rey, Mar de Cristal, and Feria de Madrid.

And train travel is another good alternative to public transport. Travel from the south of Principe Pio station to Madrid Barajas Airport Terminal 4. If you want to go to one of the other terminals, you can travel to one of the other terminals by, for example, the Metro. Other possible train stops include Piramides, Delicias, Mendez Alvaro, Atocha, Recoletos, Nuevos Ministerios, Chamartin, Fuente de la Mora, and Valdebebas train stations.

You can also travel to the airport by bus. There are arrivals at T1, T2, and T4. There are also options with intercity buses and long-distance coaches.

Continue your journey by taxi after arrivals. There are taxis outside the Madrid airport arrivals hall at every terminal ready to take you to your final destination.

Then there are also options to drive your own car by renting a car. There are both car rental options at terminals 1, 2, and 4. 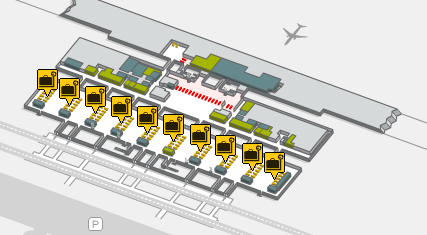 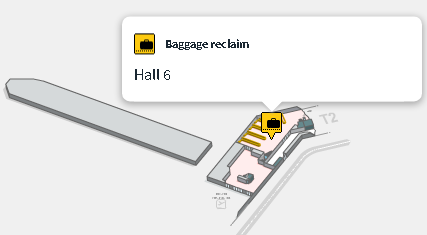 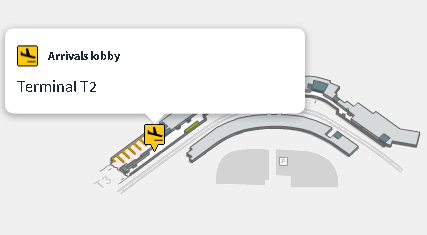 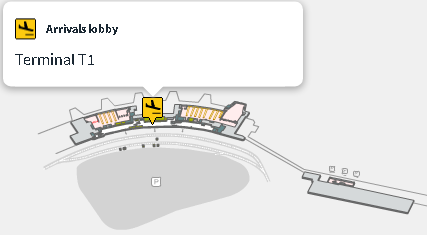 Madrid Airport is the largest airport in Spain and is located on the northeast of the center of the city. The official name of Madrid airport is Adolfo Suárez Madrid Barajas Airport. It consists of 5 terminals for all Madrid Barajas arrivals: T1, T2, T3, T4 and T4S. T4 and T4S are in a different building and therefor shuttle buses run between the other terminals. Satellite Terminal T4S can be reached with the underground train from Terminal T4 in 3 minutes.

Which airline is at which terminal? 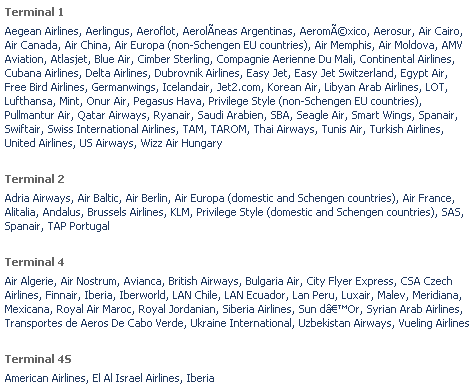 Madrid Barajas Airport in Spain has one of the ten most interesting terminals (T4) in Europe:

Airport Madrid (MAD), is a modern airport that’s 18 kilometers from the center of the city. Airport Madrid is in fifth place in Europe in terms of size. Every year there are more than 30 million passenger Madrid flight arrivals (60 million total) at this airport. 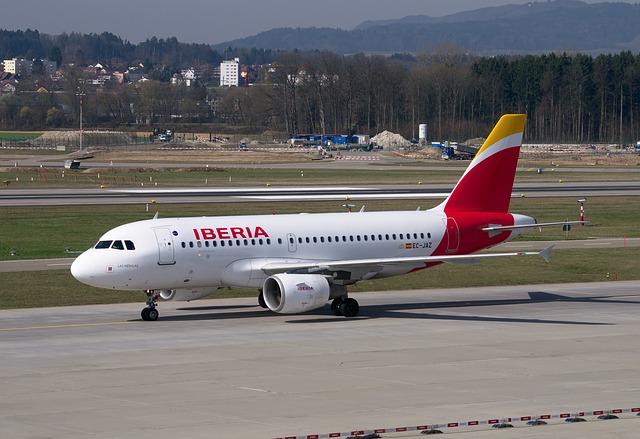 Growing to over 60 million passengers, there are plans to increase the maximum capacity from 70 to 80 million. In the long term, this will increase the competition with Heathrow Airport which serves over 80 million. With 42 million passengers Madrid arrivals in 2014, this has grown to 62 million in 2019. Madrid airport arrivals mainly came from Barcelona Airport which are accounted for 2.5 million people, mostly transported by Air Europa, Iberia and Vueling. Iberia is also the main supplier of Madrid airport with 16,529,613 passengers.

Due to the corona virus in 2020, there were far fewer Madrid Airport arrivals than the year before. There was a decrease of 72.3 percent. In the end there were ‘only’ 17,112,389 passengers. Easyjet was a popular airline at the airport. It mainly has Madrid arrivals from the U.K. Because the U.K. have left the EU, this may decrease. This also applies to Ryanair. Due to the crisis, there are far fewer international flights, but fortunately domestic flights continue to reasonably continue. Relatively flights were canceled.

The most popular airplane routes are within Spain itself and especially the islands such as Palma de Mallorca, Gran Canaria, Tenerife and Ibiza. Most MAD arrivals from outside of Spain come from the following places: