César Manrique-Lanzarote Airport is also called Arrecife Airport because of its location near the city on the island. Lanzarote belongs to the Canary Islands. It is located in the town of San Bartolomé, 5 km from Arrecife. The first Arrecife departures took place in 1941. The location where the airport is now located only started in 1946 with the first civil flights.

In the years up to 1970, several improvements were made, such as to the terminal and control center to carry out not only domestic but also international Arrecife Lanzarote airport departures in that year. With its growth, more improvements were needed in the 1990’s and several systems were added to the runway. It was not until 1999 that a new terminal was built for Lanzarote flight departures in order to increase the capacity for more passengers. The old terminal has since been used for all flights to the other Canary Islands.

There are 2 terminals at the airport. Terminal 1 is for all domestic and international flights. There are more than 20 check-in counters to start your flight. Go to your left for security check and head to the gates for boarding.

Terminal 2 is for the inter-island flights to other  Canary Islands. It’s a very small terminal with just 6 check-in desks. 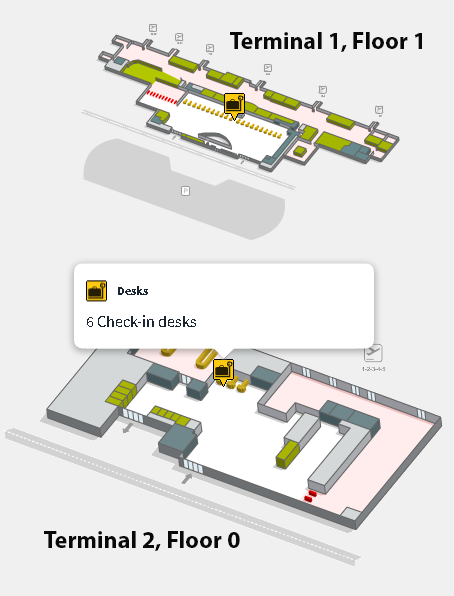 Arrecife airport departures are mostly with the following airlines:

There are flights to many different destinations all over Europe.

There are Arrecife flight departures going to:

Departing from Lanzarote Airport by taxi is easy. From both Terminal 1 and 2 they depart outside on floor 0. The journey to Arrecife is about 10 minutes. On weekdays from 6 m to 22 pm the rates are as follows: starting rate 3.15, per km 1.10, per 15 minus 3.76 and plus 1.70 for the airport. The starting rate and the price per km is slightly higher outside the aforementioned times.

There are several bus options. You can take Lanzarote departures with bus line 22 or 23. It takes them 10 minutes to get to the center from the airport. During the week, line 22 runs every 25 minutes between 7 am and 10:30 pm. Line 23 takes over at the weekend. However, this one runs a lot less frequently with every 50 minutes between 7am and 9pm. The price for this trip by bus is 1.50 euros.