César Manrique-Lanzarote Airport is the only airport on the island. It is not a large island and therefore the airport is not far from the city of Arrecife. At only 3 miles (5 km) you can be in the center of the city by bus or taxi (around 12 euros, Puerto del Carmen is 16 euros and Playa Blance 4 is 5 euros). There are many options to experience Lanzarote Airport arrivals from different Spanish and other European cities. The arrivals will take place on the 7,800 feet runway.

The Lanzarote arrivals to the other islands of the Canaries depart from Terminal 2. All other arrivals are at Terminal 1, both at floor 0. In 2019 there were 60,524 aircraft Arrecife Lanzarote airport arrivals. All these flights carried 7,292,720 passengers. That is a small decrease compared to the year before, but in the long term the airport is growing steadily. 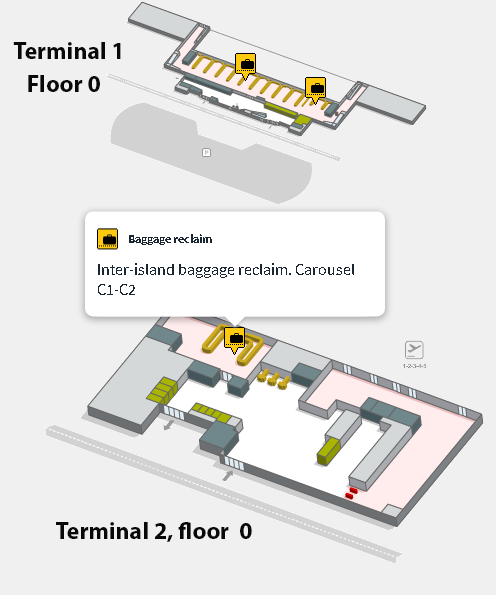 In addition to regular scheduled flights, there are many seasonal Lanzarote flight arrivals. These seasonal flights are being offered by Spanish airlines  like Air Europa, Iberia, and Vueling. Most other Arrecife airport arrivals from outside of Spain are coming from Germany and the United Kingdom. You can book you flights at the following carriers:

There are also other airlines to more destinations in Europe.

Lanzarote airport arrivals from the UK and Germany:

Other Europe destinations are:

There was a need in the 1930’s to fly to the Canary Islands from Seville. That motivated them to build an airport on Lanzarote. With an approval in 1940 as part of a defense plan. Construction started a few km west of the town of Arrecife. In 1946 the airport opened and the first Lanzarote airport arrivals took place.

The following years, various activities were carried out, including the construction of a parking platform for aircraft. In 1965 there will also be a new runway with the conveniences whereby aircraft can also land or take off in the dark. A few years later, there will also be a new terminal, an extension of the runway and a few technological improvements.

In the 1980’s and 1990’s, more aircraft parking spaces were built, a taxiway was built, and again a new passenger terminal with more capacity to meet the demand from the many flights.