Fuerteventura Airport (El Matorral Airport) is located on the island of Fuerteventura, which belongs to the Canary Islands. It is also called El Matorral Airport. It is a holiday destination in Spain for many poeple during winter, spring, but also summer. With numerous airlines from destinations all over Europe it receives many nationalities. It processed 5,6 million passengers in 2019. A decline have been in place because of the pandemic.

As you can see the busiest routes are to Germany, UK, and within Spain. Most flights even go to other islands nearby. You can fly these routes with Binter Canarias and CanaryFly.

The first Fuerteventura departures took place in 1969. It was from the Spanish airline Iberia with the Dutch aircraft the Fokker F27. The plane came from Gran Canaria and then flew on to Lanzarote. The first international flights arrived with Condor about five years later. There were direct flights from Dusseldorf. Due to the growth, the airport underwent several renovations so that it continued to meet the needs of the passengers. A new terminal and taxiway were built in the 1990s.

There is 1 terminal with two floors. Floor 0 is for the baggage claim and therefore the passengers arriving. For the Fuerteventura departures you must also be on Floor 0 to check in at one of the 66 desks. Then you go through the security check and go up one floor. On Floor 1 there are then 24 gates of which there are FUE airport departures. 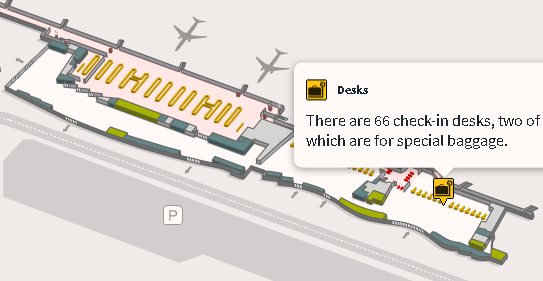 Volumes are increasing over the long term with annual ups and downs. Last year there were 23 thousand airplane Fuerteventura flight departures. 5,635,417 passengers flew with all these flight movements.

In addition to the many seasonal flights, there are also many Fuerteventura flight departures that continue to fly throughout the year. The island is mainly for Germans and the U.K. a popular destination. Popular airlines:

The route to the U.K. is mostly flown by Ryanair, Jet2.com, TUI and Easyjet. Furthermore, the Spanish airlines such as Vueling, Volotea, Iberia, Binter Canarias, Air Europa and CanaryFly also have many Fuerteventura departures to other Spanish destinations and beyond.

Many of the Fuerteventura airport departures are seasonal but it’s an interesting destination all year round since the temperature is almost always comfortable. Many tourists will fly from all over Europe to enjoy the Canaries, especially from the UK and Germany. The most popular destinations from outside Spain are: