Bilbao Airport is located north of Bilbao, the largest city in the Basque Country and the capital of Biscay province. The modern terminal is a design by architect Santiago Calatrava and has the shape of a pigeon (La Paloma) to process all the Bilbao flight arrivals.

Bilbao Airport is not a large airport which is located only a few miles from the city of Bilbao. It has been called the largest airport in terms of passengers in the region. The terminal is not that old and opened in 2000.

Bilbao Airport arrivals are on 2 runways of 2,000 and 2,600 meters long. In 2019 there was again an big increase of passengers. About 8 percent more travelers  than the year before. In total 5,905,820 passengers who used the airport to travel domestically or internationally. This upward trend started in 2013. Unfortunately the years 2020 and 2021 saw a decrease.

Vueling operates most flights, followed by the German Lufthansa. Iberia and Air Europa also have a market share of 9-10 percent. The popular destinations remain in Spain with Madrid and Barcelona. Other frequent flights from Bilbao are going to the Spanish cities like:

When traveling to other countries in Europe, most Bilbao arrivals coming from the airports of: 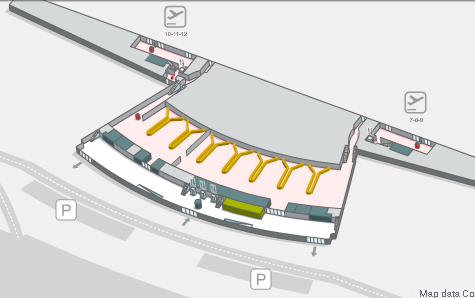 When you arrive at the airport you will end up on Floor 1 in front of the baggage claim area and then proceed to the Bilbao arrivals lobby of Bilbao Airport. When walking through the customs you will see different shops like a kiosk, rental car companies, ATM and transport like taxi and public buses.

The first arrivals took place around Bilbao at various locations without having a real airport. There were already plans in 1927, but permission to actually build an airport did not come until 1936. A year later construction started in Sondika. In the first period there were only Bilbao arrivals from the military. Only a few years later it was decided to make the airport also accessible for civil use.

It was not until 1948 that the first Bilbao airport departures came with a route to the capital of Spain, Madrid. However, it took another two years before the terminal was finally completed. Flights were carried out with two runways of around 1500 meters. More and more extensions were added. For example, the ILS landing system was implemented, the runways were extended, and a taxiway was added. In the year 2000, a new section of 32,000 m2 was added to the terminal. The parking lot was also enlarged and the northern apron.